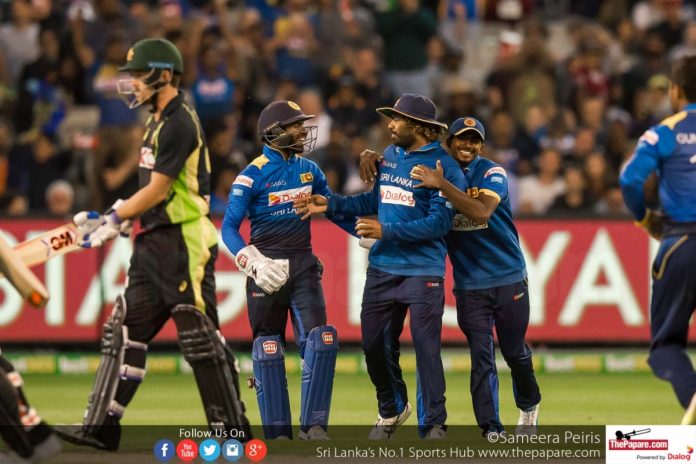 The Sri Lanka squad for the upcoming tour of Australia which will commence on 27th October has been released featuring several young faces, who excelled in the recently concluded T20I series in Pakistan.

Only four changes have been made  to the “second string” Sri Lanka squad which managed to defeat the World no.01 ranked T20I team in Pakistan. Regular skipper Lasith Malinga, wicket-keeper batsman Niroshan Dickwella, experienced top order batsmen Kusal Perera, who didn’t take part in the Pakistan tour due to security concerns, and Kusal Mendis who missed out due to injury, returns to the 16-member squad.

Lasith Malinga, who registered his second international 4-in-4 against New Zealand in the last T20I+ he appeared in, will be reinstated as the skipper of Sri Lanka while his substitute for the Pakistan tour, Dasun Shanaka has also been named in the squad.

Read : Steve Smith to return to T20Is against Sri Lanka

In the place of the aforementioned players, wicket-keeper batsmen Sadeera Samarawickrama and Minod Bhanuka, all-rounder Lahiru Madushanka and middle-order striker Angelo Perera have been left out as all of them had ordinary performances in Karachi and Lahore.

When Sri Lanka last toured Australia for a T20I series under the captaincy of Upul Tharanga, they managed to win the series 2-1, thanks to Asela Gunaratne heroics in the first two T20Is. So far, Sri Lanka’s T20I record at Australia has been exceptional as they have managed 5 wins out of 6 matches.

This will be a golden opportunity for Sri Lanka to test their strength in Australian conditions where the 2020 T20 World Cup will be held in a year’s time.

The Lions will play three T20Is against Australia at Adelaide, Brisbane and Melbourne from 27th October to 1st November.