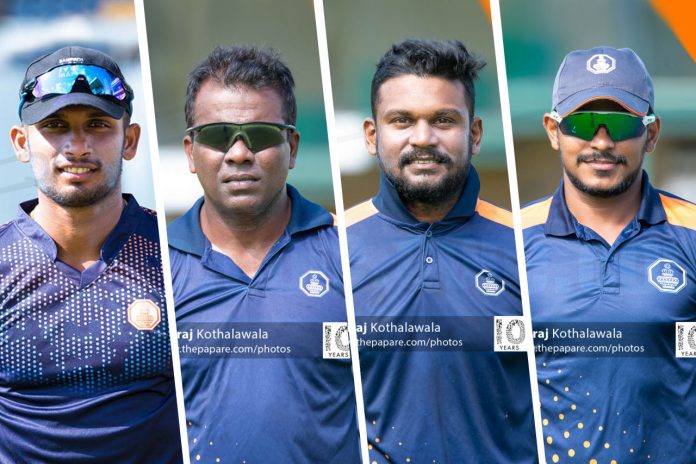 Sampath Bank defeated MAS Unichela in a game that kept swinging from side to side at the P. Sara Oval, today, 7th November, to climb up to the runners-up position in the league.

The surface looked damp and soft in the morning and straight away Sampath Bank skipper, Jeevan Mendis chose to have a bowl first with no hesitation.

It was a forgettable outing for MAS Unichela as they were taken off strike in 45 overs for just 190 runs. Kamindu Mendis played a pro knock to bring up a handsome 65 runs before being caught and bowled off a quick short ball from Dushmantha Chameera. Niroshan Dickwella made a busy 30 while some of the big names like Kusal Perera, Wanindu Hasaranga, Priyamal Perera and Chamara Silva failed to impress.

The veteran fast bowler Hasantha Fernando played a major role in stamping Sampath Bank’s authority in this game, bowling his 10 overs on the trot and confounding the MAS Unichela batsman by pulling the run rate dramatically low. The right-arm seamer picked up 3 wickets for 32 runs. Vishwa Fernando too kicked in late in the innings to bag 3 wickets to his name.

Sampath Bank got off to a flying start with the two openers cannoning the ball to all parts of the ground. Sameen Kandanearachchi ignited the innings with a six and kept going after the bowling. He smacked boundary after boundary in his 30-ball 46 runs while Sandun Weerakkody smashed 46 runs in 32 balls.

Sampath Bank was suddenly in a spot of bother after 2 quick blows from seamer Lahiru Madushanka who dismissed the Sampath skipper Jeevan Mendis and Romesh Buddika in successive deliveries. But, Dasun Shanaka held his nerve and played a matured knock shepherding the tail to maximum effect and saw his team past the line with a boundary at the end. The national cap scored 41 runs off 50 balls and remained unbeaten.

Nuwan Thushara picked up 3 wickets to top the wickets column but none of the MAS Unichela bowlers really lived up to the standards. They were wayward right from the start when the Sampath batsmen started counter-attacking. The extras column bore witness to their inconsistency in the game as it read 28 runs given away in vain.