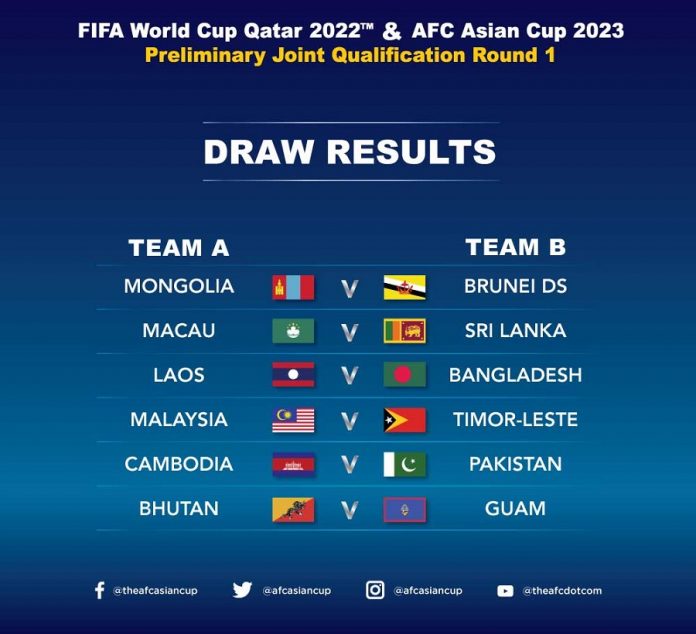 Sri Lanka were drawn against Macau in the Preliminary Joint Qualification Round 1 for the 2022 FIFA World Cup Qatar & AFC Asian Cup 2023.

The draw was held today (17th April) at the AFC House in Kuala Lumpur, Malaysia. Seeded teams Malaysia, Cambodia, Macau, Laos, Bhutan and Mongolia were handed challenging fixtures for a place in the next qualifying round.

Mongolia edged Timor-Leste in the previous edition to earn their place in the second round and are set to face a Brunei Darussalam side who were defeated 3-1 on aggregate by Chinese Taipei.

The match-up between Macau and Sri Lanka will be a rematch of their 2016 AFC Solidarity tie, where both teams settled for a 1-1 draw with Macau going on to top the group and finish runners-up behind eventual winners Nepal.

“Last time we played against Bhutan and we didn’t have positive results on those fixtures. But from last year Sri Lanka National Team has picked up and are doing well. Macau is also a strong team. Every game is important for us. Hoping to do better and show the world that Sri Lanka has some football left in us.

We are going with a methodical and organized preparations than before. We have a dedicated coaching staff and technical staff who are looking at all aspects. Sri Lankan football fans are also supporting the National Team in a bigger way which is a strength for us and we are also trying to play some friendlies before taking on Macau and hope we do better this time.

This will take us through to few more group games home and away. Win or lose we will have lots of football coming to Sri Lankan soil after long years. This win will take us to another level of football in South Asia.”

Laos and Bangladesh will add spice to the mix when they face each other for a place in the second round. Both teams are beginning their qualifying campaign in Round 1 for the first time after usually starting from Round 2.

Malaysia will face a familiar foe when they take on Timor-Leste, a team they beat in the previous edition during the group stages in the second round.

Cambodia defeated Macau 4-1 in the previous edition and will face a Pakistan side, who lost 3-1 to Yemen in the first round in the 2018 Qualifiers.

Bhutan will face tough opponents in the likes of Guam who recorded home victories against India and Turkmenistan.