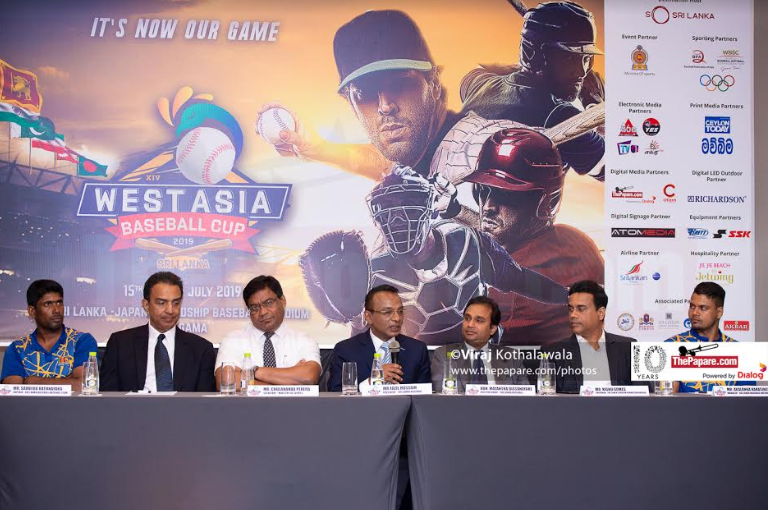 West Asia Baseball Cup is set to come alive with proud hosts, Sri Lanka Baseball (SLB) readying themselves for the 14th edition of the tournament. The event will commence on the 15th of July at the Diyagama Mahinda Rajapakse Baseball Stadium.

Amidst a packed Jetwing Colombo 7 hall, many respected dignitaries sat at the head table to announce the launch of this prestigious event.

Among them was honorable minister and Vice President of the SLB Mayantha Dissanayake, President of the SLB Mr Fazil Hussaine, CEO of SLB Mr. Priyantha Ekanayake, CEO of the Sri Lanka Tourism Board Mr. Kishu Gomez, Captain of the National Team for 2019 Sameera Rathnayake, Secretary of the Sports Ministry Chulananda Perera and past and present National team skippers.

In what is set to be the first major international sporting event in the island following April’s Easter Sunday attacks, Sri Lanka are set to host India, Pakistan, Iran, Nepal and Bangladesh in the 14th Edition of the West Asia Baseball Cup from 15-20 July 2019, organized in association with Sri Lanka Baseball (SLB).

The West Asia Baseball Cup is considered to be the highest level of competition and importance in terms of Asian Baseball. Therefore, the winner of the West Asia Cup will automatically qualify for the Asian Games.

The tournament will also see Sri Lanka defend the title they won for the first time in 2017, a victory that marked the pinnacle of a journey which had begun back in 1985, when the sport had first been introduced to the country by the American and Japanese embassies.

“This tournament is a testament to the growth of baseball in the country over the last few decades and we’re proud to be able to host it as defending champions, though our journey is not over yet,” stated Fazil Hussain, the President of Sri Lanka Baseball. “The achievement in 2017 was a momentous one, but we want to show that we can now be a consistent force and keep improving.”

In the years prior, Sri Lanka had twice emerged runners-up to Pakistan – in 2012 and 2013 – while they were outside of the top three as recently as 2015. Since then Sri Lanka has seen their global ranking rise to 41 out of 127 playing nations as per the latest World Softball/Baseball Confederation (WSBC) rankings.

Pakistan remains the top ranked West Asian team in 24th place, while Iran (53), India (65) and Nepal (69), are placed lower down the list. Bangladesh meanwhile are the newest Asian nation to be added to the official WSBC rankings and will be hoping to leave their mark at the tournament.

“About 90% of the sports bodies in Sri Lanka, came to us with multiple complaints and other personal arguments they had among themselves. The issues they have, the corrupt activity in the organization or corruption that may come in the next office bearers.

Only the persons at Baseball spoke about the betterment of the sport, the development in the next 2 years or a plan for the next 3 years.

From day 1, they came with a plan, they came for advice on development and they came with programs to develop the sport more and more. This is why this association is where it is today” praised Perera.

Humbled at the opportunity created for his trade, Mr. Kishu Gomez opined on the current situation in the country’s tourism and how this event would help strengthen what once was a thriving force. He went on to express his gratitude towards the organization and the personnel who made all this possible.

“When the proposal for this event came to me, I only looked at two things. What’s the sport and at what level is it played, and more than anything else, the people behind the sport. Being a sportsman myself, a national athlete, my first love is nothing else but sports. So, convincing me was very easy, they have my vote”.

ThePapare.com will be joining hands with Sri Lanka Baseball and the 14th West Asia Baseball Cup as the Official Digital Media Partners, dedicated to bringing previews, photos, articles, results and videos from the tournament.