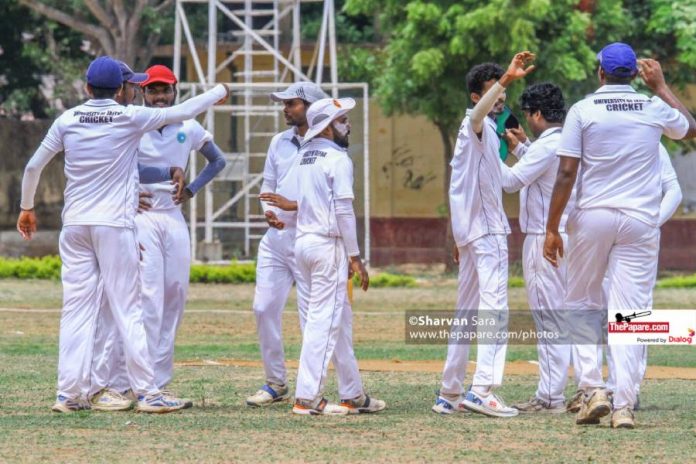 The quarter-finals of the 13th Sri Lanka University Games (SLUG) cricket tournament were conducted in 4 different venues around the island two matches each on Saturday (17) and Sunday (18).

The knock-out stage of the competition was scheduled to begin last week-end with the 4 quarter-finals, however the inclement weather which affected most parts of the country forced the organizers to postpone the matches to the following week.

With all 4 matches scheduled to take place on the 17th Saturday, 2 matches once again had to be rescheduled due to bad weather. The 2nd and the 4th quarter-finals between Colombo & Jaffna and Rajarata & Peradeniya respectively, however were successfully played in Moratuwa and Makandura (Wayamba).

University of Jaffna coming in to the quarters as the top of group C, just continued their dominance as they beat University of Colombo by 4 wickets with 58 balls remaining.

Group top of group A, Rajarata University of Sri Lanka clinched a thrilling 1-wicket victory over University of Peradeniya at the Wayamba University grounds in Makandura as they were made to work really hard to chase down a modest target set by the hanthana boys.

Defending champions, University of Sri Jayawardenepura took on University of Moratuwa today (18) and recorded a comprehensive win despite being bowled out for 186 batting first.

The last quarter-final produced the most surprising result as defending runner-up University of Kelaniya was knocked out by South Eastern University of Sri Lanka (SEUSL). SUSL boys playing in their own backyard in Oluvil bowled out Kelaniya for a mere 154 and chased down the target losing 4 wickets with 15 overs to spare.