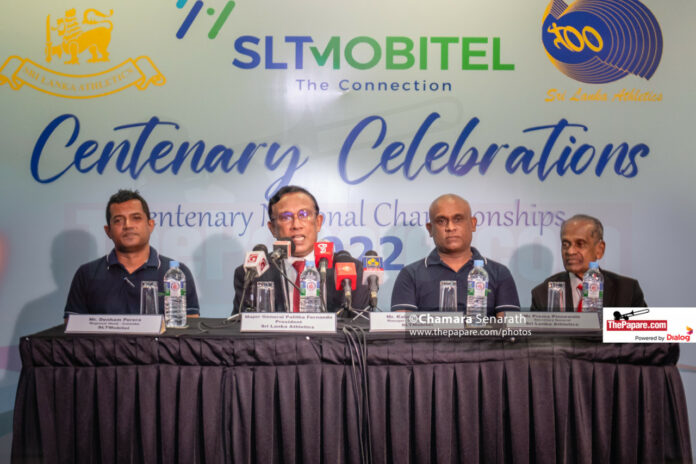 A press conference to discuss the plans of the forthcoming centenary celebrations of Sri Lanka Athletics was held today, 29, by the Athletics Association of Sri Lanka (AASL).

The AASL is one of the very few sporting bodies in the country to pass the big milestone – 100 years of existence. A special celebration with high dignitaries including the honorable Prime Minister Mahinda Rajapakse, will be held on the 7th of April at the BMICH.

This occasion will also be graced by some of the greatest athletes to ever come to light, such as Olympian Susanthika Jayasinghe, Damayanthi Darsha, Sugath Tillakaratne and co. The AASL will invite close to 400 persons to this historic event, expecting the night to be a new beginning to bigger and better things for SL Athletics.

The 100th National Athletics meet will be held in the newly renovated Diyagama Mahinda Rajapakse Stadium on the 8th, 9th and 10th of April. The first selection trial was held in February at the Sugathadasa Stadium but the second trial, which took place earlier this month, was moved to Diyagama.

ThePapare.com received confirmation that the third and final trial will also be held in Diyagama, despite the mixed feedback from athletes regarding the state of the track and wind.

Athletes from India, Pakistan, Maldives, Bangladesh, Malaysia, Vietnam and Nepal have been invited to the meet in April. Although no names have been entered yet, the countries have principally accepted the invitation to compete against our local talent.

Locally, 520 male and 215 female registrations have reached the AASL.

Major General Palitha Fernando said the track is sufficient for the athletes to perform their best, especially with foreign participation expected. He also added the inclusion of foreign athletes was made for specific high demand events, in which our best track and field athletes are set to compete, so that their performances would be of higher standards than usual.

This would in turn fuel their motivation to reach the qualification standards of the upcoming World Athletics Championship and the Commonwealth Games. According to the President, Sri Lanka Athletics is mainly eyeing the contingent for the 19th Asian Games, and a minimum of 5 – 6 medals are expected of the team in China.

The Asian Games contingent is yet to be decided by the association, but it was said that Sri Lanka hopes to field at least 20 athletes, many of whom will be selected by the existing Elite Pool, which is currently in training in the grounds of Colombo.

Ushan Thiwanka and Danushka Sandaruwan are performing well in the USA in the Men’s High and Long Jump events currently and the AASL has made it abundantly clear that Asian medals are expected from the two. Yupun Abeykoon in the 100m and Sarangi Silva in the Women’s Long Jump is also considered high return events for Sri Lanka.

The President of the AASL also will meet a larger South Asian Athletics committee on the 7th of April, right after the centenary celebrations, to discuss what more can be done by the South Asian countries.

With the 14th South Asian Games being hosted by the Pakistan Athletics Association in 2023, the committee wants to get a head start on preparation and new initiatives to conduct a more wholesome and successful event.

The AASL also showed its’ gratitude to their long standing sponsors, SLT Mobitel for joining the Association as their Main sponsor to help conduct the National meet and enhance the level of quality in the event.

ThePapare.com will also be showing selected final events LIVE from Diyagama; For more information keep it logged onto www.thepapare.com/athletics.