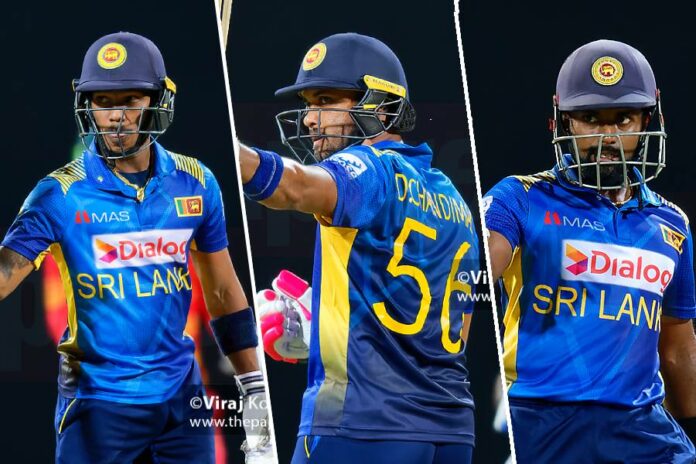 Sri Lankan batters made amends for the bowling mishaps by putting up a record-chase to win the game.

It was a well-constructed innings by the hosts to come back into the game after seeing 296 runs on the board to chase down. They did so in style with 5 wickets to spare.

It was also a commendable batting knock from the visiting Zimbabwe team who took the first lease of the crease.

The men in red got off to a strong start with the openers putting up 80 runs for the first wicket. It was rather a dismal bowling performance from the Lankans. Not to take anything away from the Zimbabwean batters but it was a sloppy bowling effort from the host team.

The first three wickets that fell in the Zimbabwean team, Kaitano – LBW, Chakabva – slid one through to his gloves trying to sweep and Ervine – kept lower than he expected and bowled through the gate, and it felt like those were the only three deliveries bowled at the stumps until that point.

Sri Lanka played 6 designated bowling options in the team, yet somehow they had to come down to using Charith Asalanka and Kamindu Mendis.

Only Maheesh Theekshana bowled consistently at the stumps, which is his natural line and he got away with 4 runs an over.

Nevertheless, kudos to the way the visitors batted. Opener Regis Chakabva scored a workman-like 72 runs to set the base for this high-scoring innings and most importantly, wore out the bowlers until the 30th over. He took his time at the start and when Sri Lanka started to make desperate moves, he capitalised on them.

The vastly experienced Sean Williams played a gem of a knock to bring up his fifth ODI hundred in 87 deliveries. The leftie scored rapidly but only with proper cricketing hits. With that knock, Williams joined an elite set of Zimbabwean cricketers in the 4000-run club becoming the 7th Zimbabwean to reach the milestone. He also became the third-fastest to that mark, behind the Flower brothers and Brendon Taylor.

Coming in for the second essay, the Lankans were determined to not let repeat what happened in 2017.

Right from the start of the innings, they kept up with that steep asking rate, and it’s tough to not wonder if it has to be the kind of momentum Kusal Mendis gained in his brief stay at the crease.

The right-hander scored just 26 runs but it is the kind of 26 that feels like a fifty or more. Merciless, ruthless, yet elegant as an artwork. That’s how his 6 boundaries felt.

The baton was then taken by his opening partner, Pathum Nissanka, who made sure the game his in Lankan kitty by the time he got out, scoring an expressive 75 runs. Nissanka was fluid on the crease and played positive cricket.

Partnerships. That was the word that the Lankans broke down this chase to. A 66-runs stand between Nissanka and Dinesh Chandimal followed by a 129-run stand between the latter and Charith Asalanka meant the match was sealed.

Senior-most batsman of the team, Dinesh Chandimal, orchestrated a patient knock of 75 runs and got his batters to bat around him. He took 91 deliveries to get to his score with 4 fours and a six inclusive.

Charith Asalanka, whose last three ODI innings read 72, 77 and 47 left the bar up high by piling up another impactful 71 runs to the list.

The two teams will meet for the second ODI of the series on the 18th of January at the same venue.