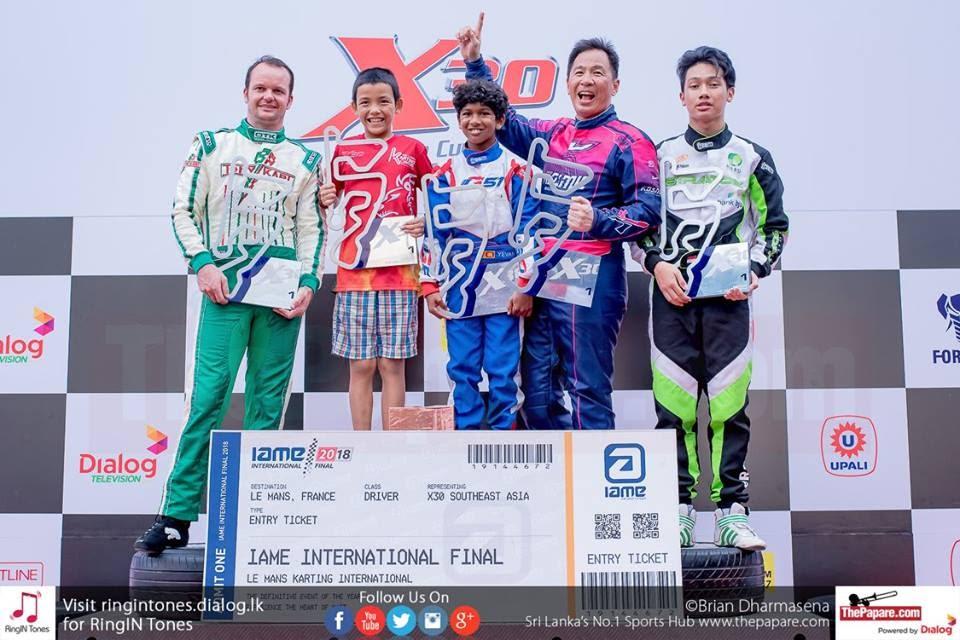 The second and the final day of X30 Asia cup Karting competition, which was held at the brand-new purpose-built Sri Lanka Karting Circuit(SLKC) from 13 to 14th January lived up to its expectations and served up a heavy dose of competitive karting.

Over 40 drivers from 8 different nationalities competed in five deferent classes at Sri Lanka’s debut international Karting race. The first day comprised of qualification and heats for the drivers with the second day being action packed with pre-finals and finals. For all the drivers who participated in the competition it was an invaluable opportunity to win a free entry to IAME World Finals held in France.

All five winners received free entry to the IAME International Final 2018 that would be held in Le Mans, France in September this year. 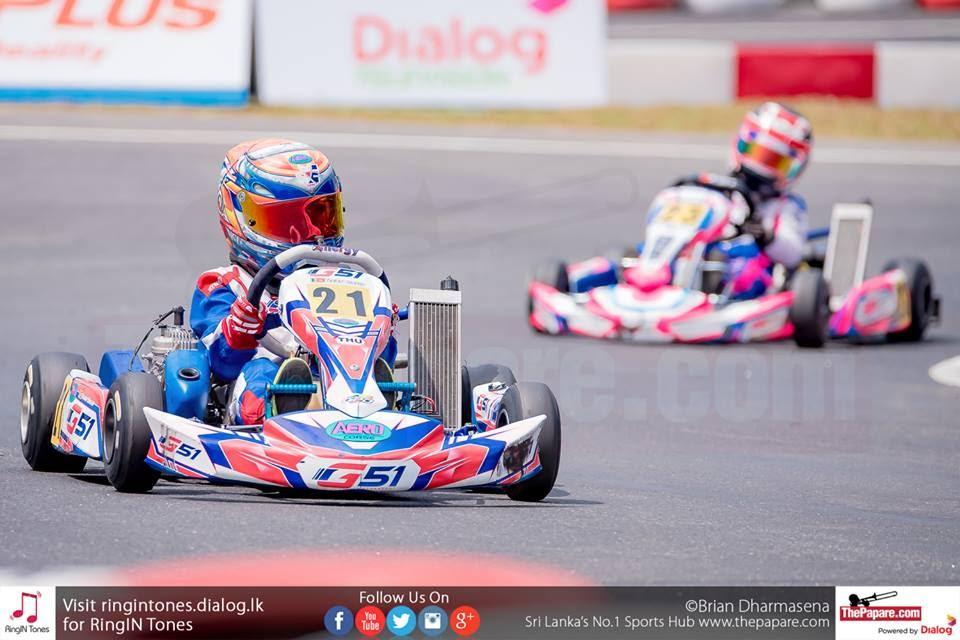 Young Yevan David of Sri Lankan origin provided the local crowds that had gathered to experience an international competition a day to remember as he a managed to win the Cadet Class with great display of maneuvering the machine. Yevan was the oldest of three David brothers where the younger two Yevin and Yanik also raced in the Cadet class.  He sure did not look like an eight-year-old behind the wheel as he showcased tremendous awareness and skill during the competitions. The David family currently reside in Singapore and will be delighted with Yevan’s victory at home. 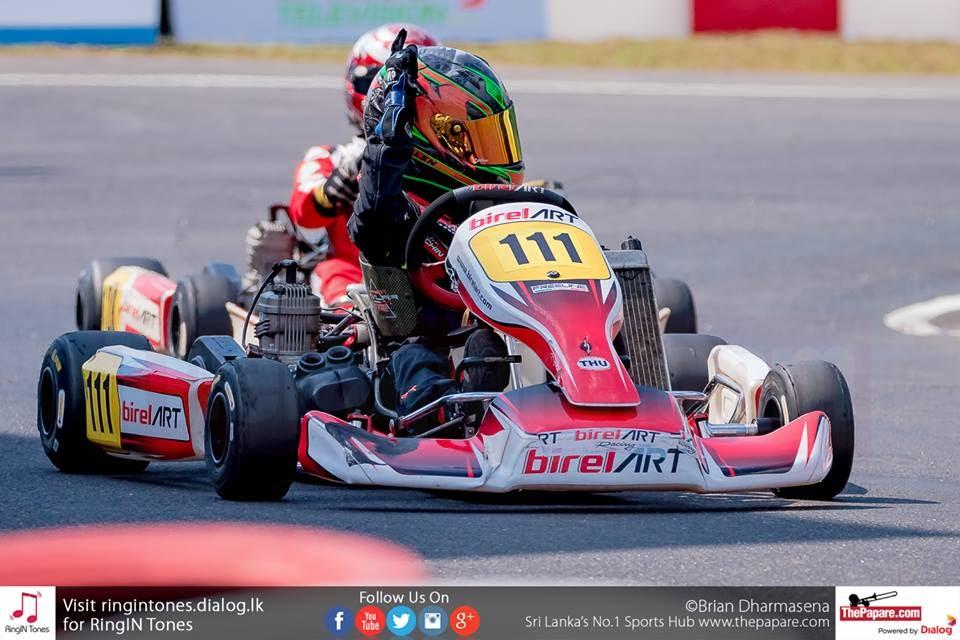 Kalen Chin won the Junior class of the competition with a dominant performance throughout the two days. 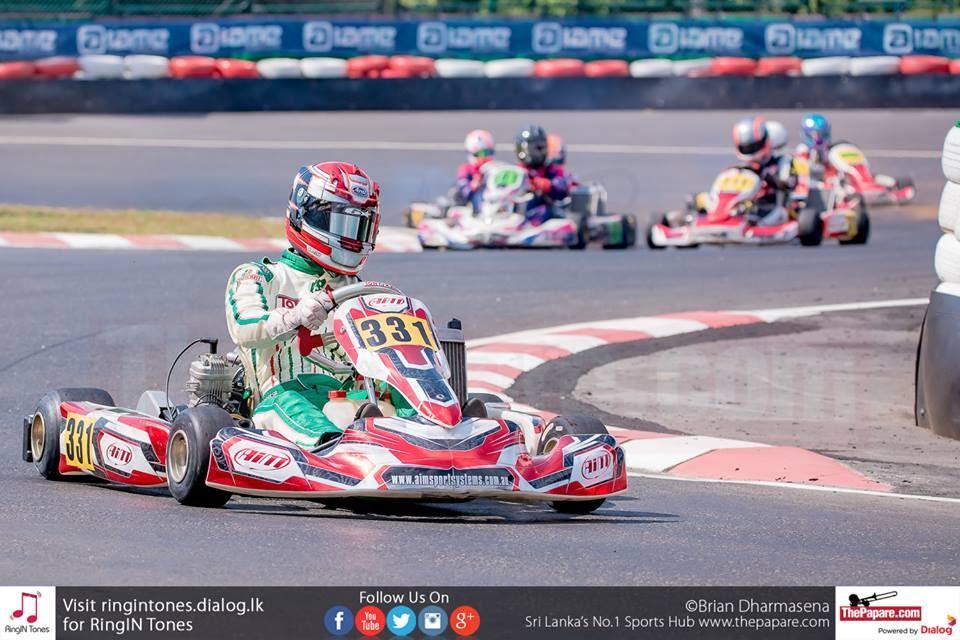 Jason Burns a one-man wonder who is his own technician, engineer and the manager won the Masters category and was a class apart from the rest of the competitors in the Masters Category and did not have any competition over the two days. 4-time Australian Karting Champion now competes under the Singapore flag and is a strong contender in the International Karting circuits. 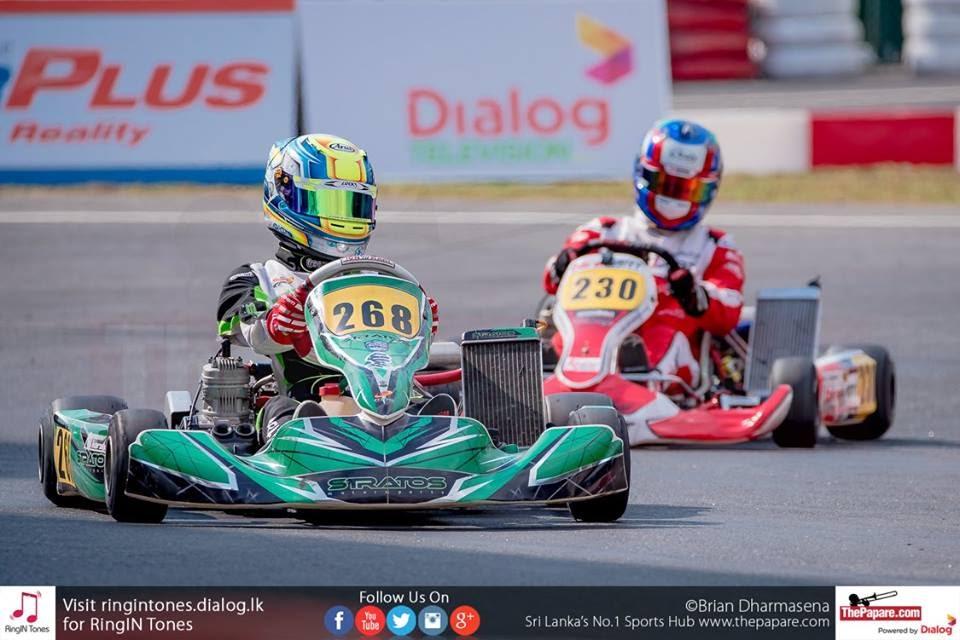 The senior class regarded as the most exciting and the fastest class in X30 competition was fiercely fought with the all the drivers, fractions of seconds apart from each other every time they raced. It was Prassetyo Hardja the 2017 X30 champion in the class who ultimately prevailed in the final race that mattered. Eshan Peiris, son of David Peiris is another young Sri Lankan driver who showed immense promise and provided the crowds that had gathered with the ideal climax as he pushed Hardja until the last corner of the 20-lap race which had everyone their feet.

Regarded as a feeder discipline to higher ranks of Motor sports, karting as is mostly the first building block of motor racing champions. An ideal training ground for kids as young as 8 years on discipline, stamina and perseverance, Karting is also believed to provide the closest experience to driving a F1 with a high-powered engine. 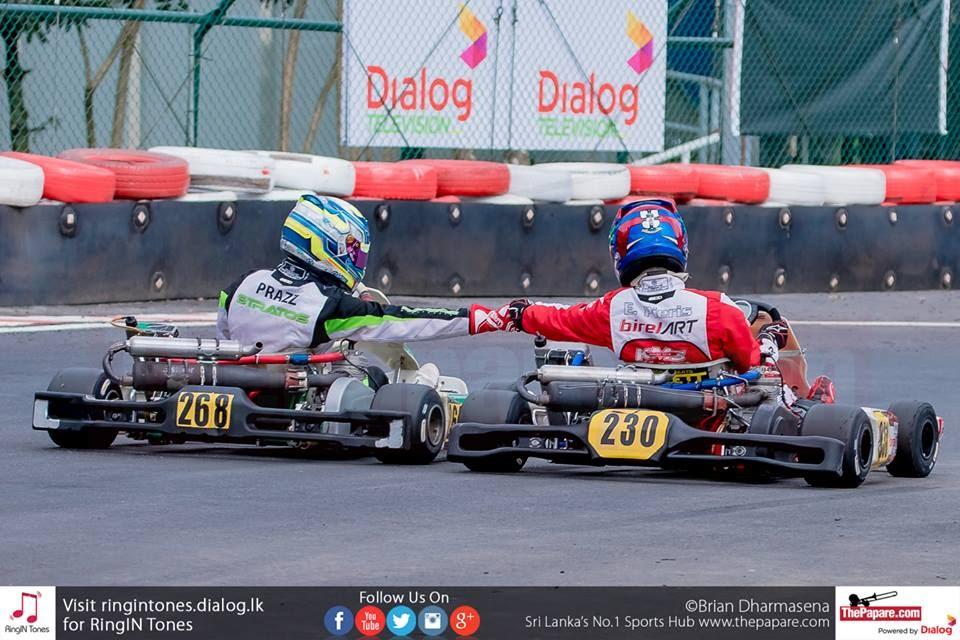 X30 is a one-make racing concept developed by an Italian motorsports company, IAME. A CIK (Commission Internationale De Karting) and FIA (Fédération Internationale de l’Automobile) recognized engine manufacturer who boasts of over 50 world Karting titles over the last 50 years in Karting, IAME Introduced this racing program in 2005. X30 provides the competitors the opportunity to race in a class structure that cover all ages from 8 years onwards. It is now an official racing program with over 25 countries in the world running an X30 challenge which works out two International competitions and several continental competitions annually.

With Karting becoming vastly popular in the South Asian region in the last decade, the very first X30 competition in Asia was held in Singapore back in 2015. It has since evolved into a series which now covers multiple South Asian destinations. With the construction of the brand-new Sri Lanka Karting Circuit and hosting X30 Asia cup for the first time outside South-East Asia, Sri Lanka became the latest addition to the X30 racing program which is lauded as one of the best in the world.

The karting circuit in Bandaragama, which is 1219m in distance is a work of art and was regarded as one of the best they have encountered by most of the international drivers who were present at the competition. On the opening day, they best lap time on the circuit was recorded at 52 seconds flat while on the second day it was hovering around the sub 53 seconds. Built in varying elevation, SLKC provides the drivers with an exciting challenge compared to the flat/level tracks that are often found around the world. It is an invaluable addition to the sporting sector of this country that could usher new era of motor racing to Sri Lanka. It is encouraging that David Peiris Racing and Leisure (DPRL) has a local racing program in the pipeline that will be provide opportunities for anyone keen to take up karting as a sport. The writer sincerely hopes that the organizers will be able to able to devise a plan to overcome the hefty financial commitment that comes with the sport so it may take the sport to a larger spectrum of the community helping to unearth a world beater in motor racing.