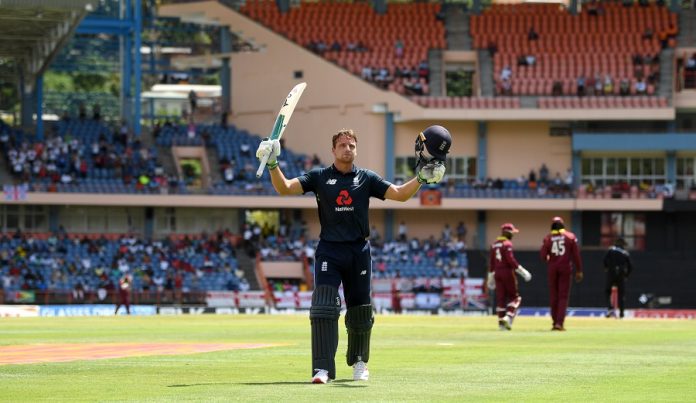 England’s Jos Buttler and West Indies’ Chris Gayle each reached 150, but it was the tourists who claimed the honours on a historic day in Grenada.

West Indies won the toss and elected to bowl first, only to see their opponents rack up their third-highest ODI total. Jonny Bairstow and Alex Hales, opening in place of the injured Jason Roy, got England’s innings off to a rollicking start, adding a century stand inside 14 overs.

Bairstow was the early aggressor, bringing up his first 50 in 10 ODIs off 31 balls. After he was bowled, Hales took over, smashing eight fours and two sixes in his 73-ball 82, and ensuring England made up for the loss of usual lynchpin Joe Root for 5.

Once he was dismissed, it was the Buttler show, with Eoin Morgan playing a fine supporting hand. The pair added 204 for the fourth wicket, and though Morgan fell two balls after bringing up his 12th ODI ton, Buttler ensured England received an explosive finish.

He made his highest ODI score, and the second-fastest 150 of all time in ODIs. He accelerated superbly, moving from 50 to 150 in just 31 balls. His 12 sixes was a record for an Englishman in an ODI knock, and England’s 24 combined maximums broke the world record, set by West Indies in the first ODI of the series, for sixes by one team in an ODI.

For a time, West Indies looked like they might reclaim their own record at the first possible opportunity, as an inspired knock from Gayle meant the gave a good fist of chasing England’s 418/6. The opener had started slowly in the first two ODIs, but this time launched from the off, smashing his ninth ball for six after John Campbell had plundered 14 runs from five Mark Wood balls in the second over of the reply.

Wood, bowling with his customary pace and hostility, bounced back to claim Campbell’s and Shai Hope’s wickets. In the company of Darren Bravo, Gayle marched on, and by the start of the 23rd over, they had driven their side to 220/2, needing less than seven and a half runs per over to win.

The re-introduction of Wood felt like a pivotal moment, and so it proved as he struck twice in three balls, enticing Bravo to toe-end a pull shot to Ben Stokes at mid-off, before dismissing Shimron Hetmyer for a two-ball six, having been pulled over mid-wicket first up.

Captain Jason Holder chipped in with a calming cameo as Gayle’s destruction continued. He brought up his 150 during a stretch of 20 runs in five balls off Rashid, and looked like he might see his side home.

He and Holder fell in the space of two overs, and it felt like that might be that, only for Carlos Brathwaite and Ashley Nurse to add 88 as West Indies dared to dream once more.

And then, all of a sudden, it was over. Rashid returned to claim four wickets in five balls, and that was it. England had just beaten West Indies in the sixes count – 24 to 22, with their combined tally a record – and just beaten them in the run count, by 29 runs. But on both they had been given an almighty scare.