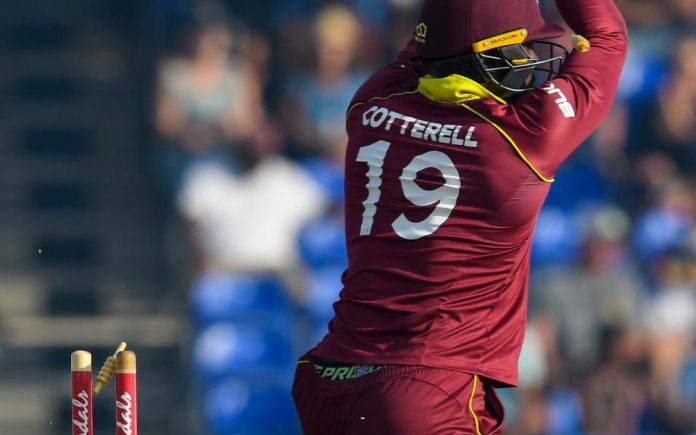 West Indies slumped to 71 all out in the third T20I to hand England victory and a 3-0 whitewash.

David Willey started the carnage, striking with his very first ball as Shai Hope spooned a drive to Alex Hales at cover. He struck again in his next over, Shimron Hetmyer clumping an attempted big shot to Chris Jordan at mid-off, and then twice more in his third over, John Campbell, on debut, skying and getting caught by Joe Denly in the covers, and Darren Bravo nicking off two balls later.

West Indies were in disarray, and while the introduction of Denly’s part-time leg-spin might have seemed like a respite, he was the next to strike, Jason Holder hitting high where Jordan clung on again.

England win by eight wickets with 57 balls remaining and seal the series 3-0.

It was left to Mark Wood and Adil Rashid to clean up the innings. Wood bowled with pace and guile, following up a rapid bouncer with a slower one, which Nicholas Pooran could only mistime to Jordan, who didn’t look like dropping anything.

Carlos Brathwaite could only edge another quick delivery, allowing Jonny Bairstow to snaffle a brilliant, reflex grab, while Sheldon Cottrell’s three-ball stay saw him smear Wood over the off-side before backing away almost off the pitch and getting bowled.

In between, a pair of gorgeous Rashid googlies proved too good for Fabian Allen and Obed McCoy, and just like that, West Indies were all out for 71. They had exceeded their 45 all out from two days hence, but in all other ways this was a calamity.

It all but sealed the game, and as Alex Hales smashed two fours and a six to end the first over, it looked like they might do so in a hurry. The Windies bowlers deserve credit for sticking to their task, dismissing Hales – brilliantly caught by Campbell on the leg-side fence – and Bairstow – bowled by a beautiful Devendra Bishoo leg-break – and bowling two maidens to boot.

Eoin Morgan still provided an emphatic finish, striking a four and a six as if to emphasize the gulf between the sides. The game was all done in 23.3 overs.