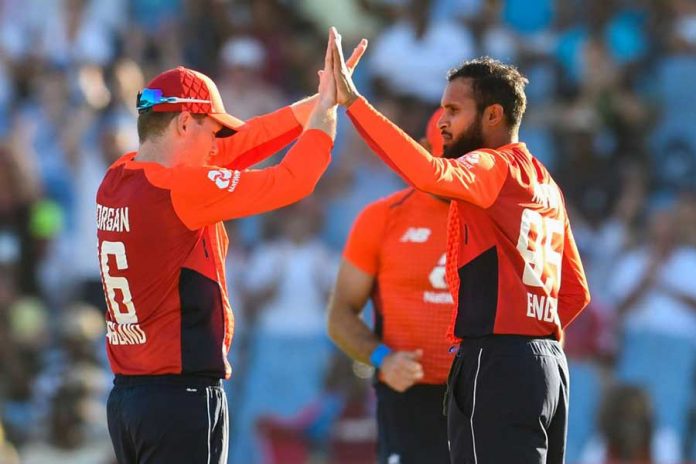 England rode on Jonny Bairstow’s 27-ball half-century and a strong bowling effort to begin the Twenty20 International leg of their West Indies tour with a four-wicket win.

Tom Curran picked up a career-best 4/36, while Chris Jordan and Adil Rashid were economical in taking 2/16 and 1/15 respectively. They kept an explosive West Indies line-up to 160/8 at the Darren Sammy National Cricket Stadium in St Lucia on Tuesday, 5 March.

Ten sixes were hit in the Windies batting innings. Nicholas Pooran, in slamming 58 in 37 balls, offered the most significant warning of how destructive they could be. However, few batsmen built on their starts after their team was asked to bat, and the team couldn’t back it up on the field.

Both Shimron Hetmyer and Shai Hope fell to Curran, while Chris Gayle was done in by a slow wide yorker from Jordan, all inside the Powerplay. Darren Bravo struggled against Rashid, and even Joe Denly kept him quiet, but Liam Plunkett went for runs at the other end as Bravo and Pooran added 64 runs for the fourth wicket.

Jordan got the breakthrough, taking a diving catch off his own bowling to send back Bravo for 28 off 30 balls. Pooran, though, was in fine touch – a reverse slog-sweep for six off Denly a particularly stunning shot – as he brought up his half-century in 32 deliveries. A yorker from Curran finally ended his innings, which by then had included three fours and four sixes.

Curran, Jordan and Rashid had, between them, sent down 34 dot balls in their 11 overs, and that made all the difference.

England lost Alex Hales and Joe Root inside the first three overs, but they’d already knocked off 33 of the runs required by then, and were 62/2 at the end of the Powerplay.

Bairstow did a bulk of the damage, his 68 off 40 balls including nine fours and two sixes. In his third-wicket stand of 51 with Eoin Morgan, the captain’s contribution was all of eight runs.

Denly and Sam Billings added another useful half-century stand after Ashley Nurse had Bairstow caught at the ropes. When both set batsmen fell in quick succession in the space of four balls at the death, the hosts raised the spectre of another England batting collapse.

England though pulled through, and Jason Holder’s men were left to rue the 23 extras they conceded.