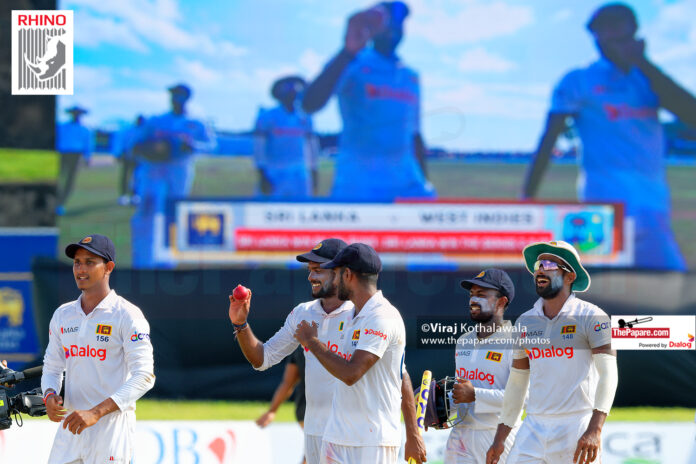 Lasith Embuldeniya and Ramesh Mendis picked up 5 wickets a piece as the visitors slumped from 90/2 to 132 all out, losing 8 wickets in the post-lunch session.

Team Sri Lanka decided to bat on despite coming into the final day with a lead of 279, taking the opportunity to use the heavy roller on the surface. They added just 18 runs to the overnight score before Lasith Embuldeniya was dismissed for 39 and Dimuth Karunaratne decided to call in the troops.

Embuldeniya and Dhananjaya de Silva (155*) went past the record for the highest 9th wicket stand for Sri Lanka in Tests (118 – Thilan Samaraweera & Ajantha Mendis vs India at the P Sara Oval), finishing with 124 and more importantly taking the hosts to a position from where it is their game to lose.

The track didn’t seem to be offering much to the spinners until the umpires decided to change the ball at the end of the 42nd over. West Indies lost 8 wickets for just 46 runs from that point.

Ramesh Mendis, Sri Lanka’s most successful bowler of the series, with 18 wickets to his name, was the one who started the Windies capitulation, picking up Shai Hope, Roston Chase and Kyle Mayers in the 44th over.

The off-spinner certainly seemed to have the upper hand over Hope in this series, picking him up in all 4 innings. He was on a hat trick after picking up Hope and Chase and bowled nearly the perfect delivery to Mayers first up, but couldn’t get the edge. He did get his man with a similar delivery later on in the over.

Embuldeniya kept chipping away at the other end and when he dismissed Jason Holder and Nkrumah Bonner in consecutive overs, the Windies resistance was more or less done.

Having taken 6 wickets in the 1st innings, Mendis completed his 1st 10-wicket haul in Test cricket and could have had another 6-wicket haul when last man Jomel Warrican skied one, but Embuldeniya put down the catch at deep mid-wicket.

With the win, Sri Lanka stay on top of the ICC World Test Championship points table, with a 100% win percentage.