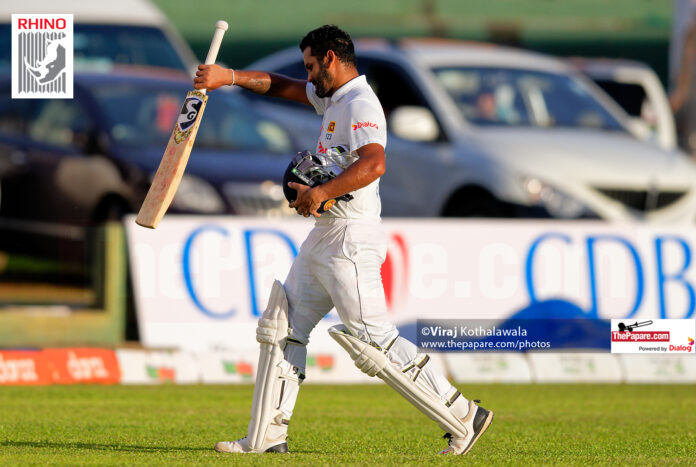 Dimuth Karunaratne fell 8 runs short of his 7th consecutive 50+ score in Test Cricket but Sri Lanka dominated a rain curtailed day 1 of the 2nd Test against West Indies in Galle.

Karunaratne would have joined Everton de Weekes, Andy Flower, Shivnarine Chanderpaul, Kumar Sangakkara, Chris Rogers and KL Rahul as the only batters to achieve the feat, but unfortunately fell to Roston Chase with the milestone within striking distance.

The performance of the day, however, came from young Pathum Nissanka, who made a classy 61* opening alongside Karunaratne. The right-hander looked the more comfortable of the pair, putting the crease to good use as he drove and cut his way to his 3rd Test half-century. He comfortably outscored Karunaratne in the early part of the innings, making full use of the regular loose deliveries served up by the visitors.

The Windies were loose early on, conceding a number of boundaries to Nissanka, before Kemar Roach and Jason Holder settled into a good spell with the new ball. Kyle Mayers’ 2 over spell released the pressure built, particularly on Karunaratne, who seemed to be struggling to middle the ball, but the spinners Veerasamy Permaul, Roston Chase and Jomel Warrican came in to tighten things up once again.

Nissanka and Karunaratne handled the good deliveries impressively, while making the most of the boundary balls on offer, bringing up their 2nd 100-run partnership in the series. This was also Sri Lanka’s 5th 100+ partnership in their last 7 test innings.

The visitors once again wasted a couple of reviews early, the 2nd one particularly baffling as Oshada Fernando played and missed and Kraigg Brathwaite went to the DRS on the insistence of the bowler Jomel Warrican, despite keeper Joshua Da Silva not being too keen on the review.

Earlier in the day, incessant rain in Galle saw the 1st two sessions of the day washed off before Charith Asalanka was handed his Test cap by Karunaratne, making him Sri Lanka’s 157th Men’s Test player. He was swapped straight in to the team, with pace bowler Dushmantha Chameera rested for this game.

The West Indies came into the 2nd Test with 3 changes to the side that played the 1st Test last week, with Jeremy Solozano (concussion), Shannon Gabriel and Rakheem Cornwall left out for Shai Hope, Kemar Roach and Veerasamy Permaul.

With the loss of over 55 overs in the day’s play, the game is scheduled to start at 9.45am on day 2, weather permitting.