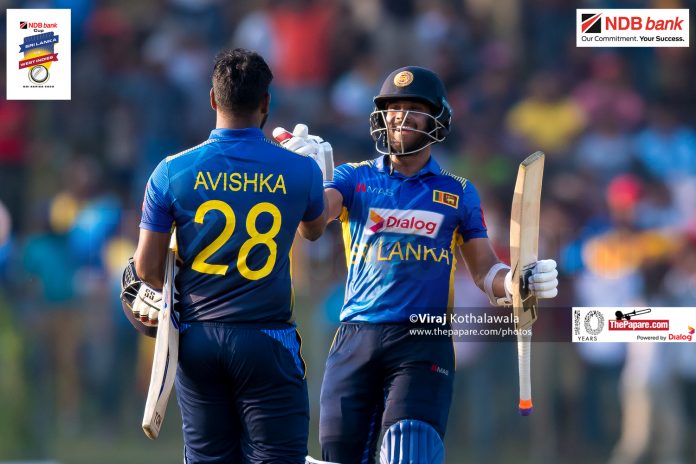 Kusal Mendis and Avishka Fernando both made their 2nd ODI centuries to power Sri Lanka to a total of 345/8 in the 2nd ODI against West Indies in Hambanthota before the bowlers bamboozled the visitors to give Sri Lanka a 161-run win.

West Indies skipper Kieron Pollard unexpectedly put the hosts in to bat after winning the toss and his decision was seemingly proved right when strike bowler Sheldon Cottrell brought out his signature salute in the 3rd over, sending back southpaws Dimuth Karunaratne and Kusal Perera off consecutive deliveries, Sri Lanka slumping to 9/2.

The pitch wasn’t doing much but Jason Holder managed to find the edge of Mendis’ bat in the next over, only to see the chance spilled by skipper Pollard at 2nd slip. It proved to be a very costly miss for the Windies as Mendis made them pay, going on to score his 2nd century in ODIs. The right-hander was at his customary best, timing the ball to perfection and finding the gaps at will. Alongside him Fernando too picked up boundaries square of the wicket with ease as the pair went on to put together Sri Lanka’s highest partnership for the 3rd wicket (239) in all ODIs.

>>Mickey Arthur on Sri Lanka’s fielding in the 1st ODI<<

The 3 lower-order all-rounders then provided the flourish at the end of the innings Sri Lanka needed, with Thisara Perera (36), Wanindu Hasaranga (17) and Isuru Udana (17) all scoring at well over a run a ball to take Sri Lanka to 345/8, the 2nd highest total at the Mahinda Rajapakse International Cricket Stadium.

All in all it was a pitiful performance by the Windies on the field, with 3 regulation catches going down and plenty more runs being given away through mis-fields, in contrast to Sri Lanka who had a near perfect day in the field, spoiled only by the dropped catch by Lakshan Sandakan at short fine leg early in the Windies’ chase.

The West Indies need a good start and that was exactly what they got through Shai Hope and Sunil Ambris. The pair put on 64 for the 1st wicket before a brilliant fielding effort from Angelo Mathews saw Ambris stranded at the none-striker’s end. Hope looked ominous nonetheless, going to his 15th ODI 50 and he looked good for his 7th century in Asia before Mathews struck, getting him to play one early and lob a catch to the man at short mid-wicket.

The wrist-spinners came on and dried up the runs; with Hope gone, West Indies needed something special from their middle order but it wasn’t to be as neither Rolston Chase, Nicholas Pooran, Pollard or Holder was able to make much of an impact.

In the end it was almost all too easy for Sri Lanka as they shut the visitors down in less than 40 overs.

Video – “Mendis has proved us Wrong” – Around The Wickets