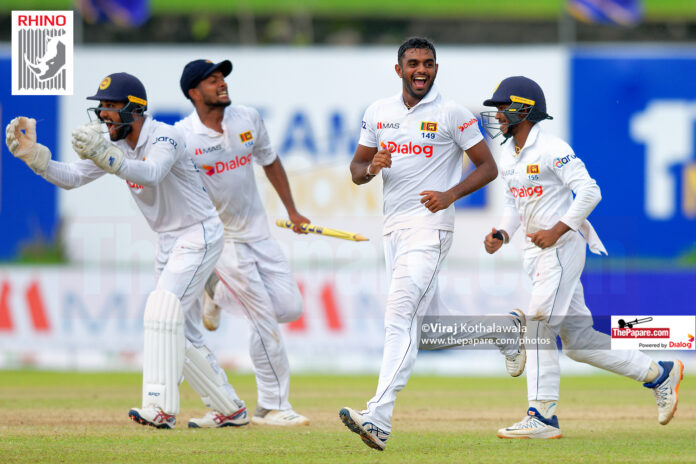 Lasith Embuldeniya picked up his 4th 5-wicket haul in Tests just in time for Sri Lanka, wiping out the West Indies resistance just before rain began to fall at the Galle International Cricket Stadium.

Embuldeniya, playing his 1st international game since March of this year, couldn’t find much of a rhythm in the 1st innings, but bowled with a lot more control and consistency in the 2nd innings and was duly rewarded with another 5-wicket haul, his 4th in 12 Tests.

Despite the ball spinning prodigiously on day 5, Sri Lanka were just unable to make that early breakthrough as overnight batters Nkrumah Bonner and Joshua Da Silva resisted staunchly, with rain seeming an inevitability during the day.

Both survived a couple of close calls, with Dimuth Karunaratne missing a chance to run Da Silva out early in the day while Pathum Nissanka put the same batter down at leg-slip a couple of overs later when he was on 23; incidentally this would have been Mendis’ 5th wicket, despite coming into the day with 4 wickets to his name, the youngster could not claim a 5th with 2 relatively straightforward catches going down off his bowling.

Da Silva also survived a close lbw call on 50, when the ball clipped his pad before hitting the bat. The Sri Lankans seemed uncertain whether it was bat or pad first but went for the almost in desperation – both the impact and trajectory were umpire’s calls.

Bonner was given out on 41 by umpire Ruchira Palliyaguruge off Mendis, but unfortunately, the review from the batter didn’t go in favor of the hosts, with the ball shown to be missing the stumps. He was then dropped by Karunaratne, again off Mendis’ bowling, when he was on 54.

Lasith Embuldeniya was finally rewarded for being Sri Lanka’s most consistent spinner on display, when he got Da Silva to nick to slip. Da Silva’s gritty knock saw him become the first batter to score a half-century when coming into bat with the score below 20 runs and 6 wickets down in test cricket.

Rakheem Cornwall took a much more aggressive approach to things and the visitors will rue the fact that he did, as he skied one to mid-off and saw West Indies’ last 3 wickets fall for just 11 runs after Cornwall and Bonner had put on 31 for the 8th wicket. With the rains beginning to fall just minutes after Sri Lanka picked up the last wicket, one can only wonder what could have been if Cornwall had decided to stick around.

With the win, Sri Lanka claimed their 1st ICC World Test Championship points, going to the top of the table with a 100% win record.