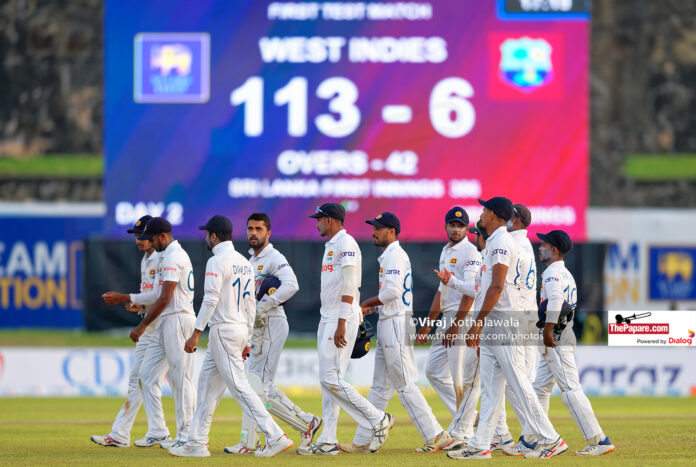 Ramesh Mendis, Lasith Embuldeniya and Praveen Jayawickrama picked up all 6 West Indian wickets to fall on day 2 of the 1st Test, leaving the visitors struggling on 113/6 at the end the day’s play.

13 wickets fell for 232 runs on day 2, with the spinners from both sides dominating proceedings in Galle.

Earlier in the day, it was part-time off-spinner Roston Chase who put a stop to Sri Lanka’s dominance, picking up 5 for 83 as the hosts went from 267/3 overnight to 386 all out midway through the day.

The West Indies opening pair of Kraigg Brathwaite and Jermaine Blackwood seemed to settle in well, putting on 46 for the first wicket, particularly vice captain Blackwood who was opening the batting for the 1st time in Tests as he looked to take on the spinners early.

Dimuth Karunaratne used the two left-arm spinners predominantly early on, with the West Indies top order packed with right-handers, but both Embvuldeniya and Jayawickrama took a while to settle in to the right lines and lengths.

Embuldeniya eventually picked up Blackwood and Jayawickrama sent Nkrumah Bonner back a short while later but it was only once off-spinner Mendis was introduced that the hosts really began to turn the screws on West Indies.

Mendis had both Brathwaite and Shai Hope caught on the leg side off consecutive deliveries, the latter falling to a brilliant catch at short leg by Oshada Fernando, before claiming Roston Chase as his 3rd victim. The off-spinner seemed to just get something a little extra pace and bounce from the track, creating a few chances for himself in the process. After his introduction to the attack, West Indies went from 80/2, to 100/6 in the space of 8 overs, digging themselves a hole it will be tough to get out of.

Earlier in the day, Sri Lanka’s overnight batters Dhananjaya de Silva and Dimuth Karunaratne looked comfortable early in the day, before the former was dismissed hit wicket in an unfortunate manner.  De Silva defended a delivery from Shannon Gabriel and tried to swat the ball away from the stumps, he missed both the ball and the wickets in his first try, then tried again and only managed to hit the bails.

Karunaratne was looking imperious in the middle, untroubled by the extra spin and bounce the Windies bowlers were able to get off the track but it was that man Roston Chase who struck once again, getting on to turn away from Karunaratne before Joshua Da Silva completed a smart stumping, catching the Sri Lankan skipper on the crease.

West Indies seemed to bowl much better lines during the day and so were rewarded, with Sri Lanka playing a long tail.

The hosts will come into day 3 looking to wrap things up early, so that they may have another bat and put a target on the board for West Indies.

Match Referee, Ranjan Madugalle, has approved Shai Hope as Solozano’s replacement in the ongoing test match. This is in accordance with the ICC concussion substitution rule.”