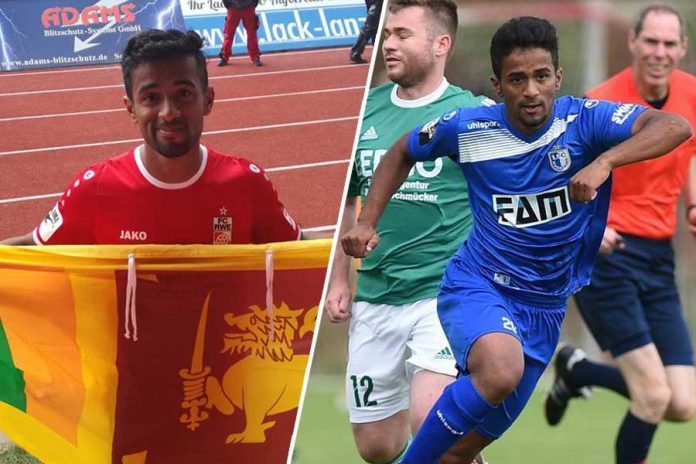 We have frequently heard through the media that many immigrants from Sri Lanka are succeeding in various fields in the countries they reside in.

Many Sri Lankans have progressed to leading positions in the world. Similarly, some sportsmen from Sri Lanka have also excelled on the world stage.

The national Football trials were held for Northern..

We are going to look at Waseem Razeek, a Sri Lankan Footballer playing in Europe, who has brought the name of Sri Lanka to the international stage as proof that talented people will do well wherever they go.

Jamal Razeek, the father of Waseem, studied at S. Thomas’ College, Guruthalawa. He represented and vice-captained the Sri Lanka National Hockey team and went to Germany in 1971 for employment. There he worked as a driver, and later became a security officer at a foreign embassy. Jamal married and moved to Berlin with his wife in 1994. During this period, Waseem stepped in to this world.

Jamal loved football but was not able to play, and so pushed Waseem to spend much of his childhood on the football field.

He wanted Waseem to watch the World Cup in 1998 and so he bought a television with the intention of increasing Waseem’s interest in football. Despite many difficulties, Jamal took Waseem to watch football matches in the city too.

It is as a result of his tireless efforts that Waseem, who started playing football at the age of eight, is now shining as a professional footballer in Germany.

“Football is a popular sport in Germany. There are many old clubs and everyone is expecting to play in those clubs. However, I have managed to win Berlin’s Best Footballer award,” Waseem talked with ThePapare.com.

Waseem, showed promise at the school levels and was given the opportunity at the age of 16 to compete to play for the German National Junior team. However, Waseem was unfortunately injured during the two-stage training competition in the lead-up.

The FIFA World Cup needs no introduction. It is the pinnacle…

Waseem clashed with the Turk Emre Can, from the opposition, who is now playing for Liverpool. He injured his shoulder and leg and was out of the game for 4 months, forcing him to miss out on selection.

“When I was eight years old, I joined a small football club in Germany called NFC Rot-Weiß Neukölln and after that I played for SV Tasmania Berlin from the age of 9 to 16. At that same time, I was chosen to represent Berlin Football Club and played in a football tournament representing Berlin, which is held annually in Germany, where the 16 state sides participate. Because of my performance, I was given an opportunity to try out for the Junior German team.

In 2011, a training camp was held in Berlin for the selection of the Under 17 National team for the FIFA World Cup in Mexico. Unfortunately, I injured my shoulder,” a disappointed Waseem mentioned.

Waseem started his professional football career at the FC Union Berlin, one of Germany’s largest football clubs. Although he was contracted with the club from 2011 to 2015, his performance in the middle was hampered by injury.

He then signed a contract for two years with FC Magdeburg from 2015 July, managing only 3 goals in 32 matches.

Before his time at the club was completed, he received offers from different countries, including England, Denmark, Netherlands, Switzerland, Turkey and Malaysia, but he decided to remain in Germany. Following this, Waseem signed with FC Rot-Weiß Erfurt, which is based in Thuringia which is the sixth smallest city in Germany.

It was at this point that one of his father’s close friends, the then Up-Country Lions’ Head Coach and former Sri Lanka National Football Team’s Assistant Coach, Devasagayam Rajamani’s efforts brought Waseem a potential opportunity to play for the Sri Lanka National team. Waseem joined the National team in training during his visit to Sri Lanka.

Waseem spoke about his experience with the National team.

“In 2014, when I came to Sri Lanka with my family I got a chance to play with the Sri Lanka National team with the help of my father’s friend and well-known coach Devasagayam. Last year when I arrived in Sri Lanka on vacation, he contacted us and asked me to join a 10-day training camp for the National team in Colombo.

During this time an officer from the Football Federation met me and promised me an opportunity to play in the National Football team in the SAFF Championship. But no one has contacted me yet,” Waseem added.

“I want to play international matches for Sri Lanka, and my dream is to play at least an Asian Cup tournament for my country. Even though my father tried in many ways to make my dream true, it has not worked out yet.

I was very well-received. Everyone in the team is really talented. But in the matches in Sri Lanka, the domestic players may be able to improve more if foreign players are brought in to play with them,” he added on his ambitions and what the domestic system could improve on.

Unsurprisingly, Football is a family affair for the Razeeks, with Waseem’s two brothers also involved in the sport.

“I have two brothers, Murshid and Mussakir. These two are more talented than me. Mursid is doing well with his studies while also playing football. Mussakir is playing at Victoria Berlin Football Club.”

It is clear that Waseem’s real goal is to be a genuine all-rounder in life;

“Even though my father has been encouraging me to play football, my mother is always urging me to think about my studies. But it is impossible to pay attention to education and sports equally. I also wanted to learn Tamil and Sinhala ​​and my parents made arrangements to bring books from Sri Lanka. So now I can speak Tamil and Sinhala.

I completed my higher studies in a popular sports school called Passo, in order to honour the wishes of my mother. But now I’m giving priority to football since I have been selected for university.”

His parents are the main reason for this growth. Jamal Razeek, an immigrant from Guruthalawa, has earned the honour of giving his three sons the opportunity to play sports, amidst all his difficulties. And speaking to Waseem, it is evident that he will go from strength to strength because of this firm foundation his parents gave him.