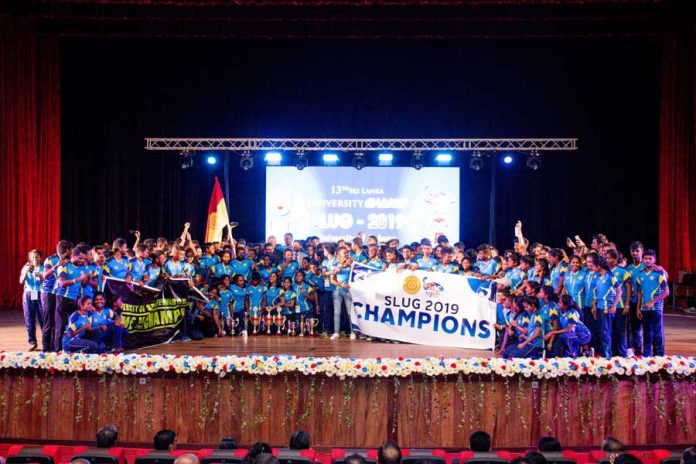 The 8th edition of the Sri Lanka University Games, better known as SLUG XIII came to an end on 7th September with University of Sri Jayawardenepura emerging overall champions. This year’s SLUG was hosted by University of Ruhuna with 14 state Universities competing against each other in 22 different sports.

Initially it was University of Colombo who were in the lead but they had to be satisfied with the runners up title this time around as J’pura clinched the title for the 1st time since 2013. University of Moratuwa emerged 2nd runners up after overtaking University of Kelaniya on the final day.

This year saw many other upsets with defending champions losing their titles and the underdogs getting the better of the fancied teams. The season started off with Cricket and Rugby preliminaries. Eventually the marauding University of Colombo beat University of Kelaniya in the rugby finals 39-00 and University of Sri Jayawardenepura beat University of Jaffna in the cricket finals. The Hockey Men’s championship was won by University of Peradeniya while the Sabaragamuwa University won the Women’s title.

The closing ceremony was graced by the legendary Kumar Sangakkara as the chief guest in the presence of Vice Chancellors of the participating universities and officials of the SLUG organizing committee. The Games are held every three years with the next SLUG scheduled to be held at the Eastern University in 2022.