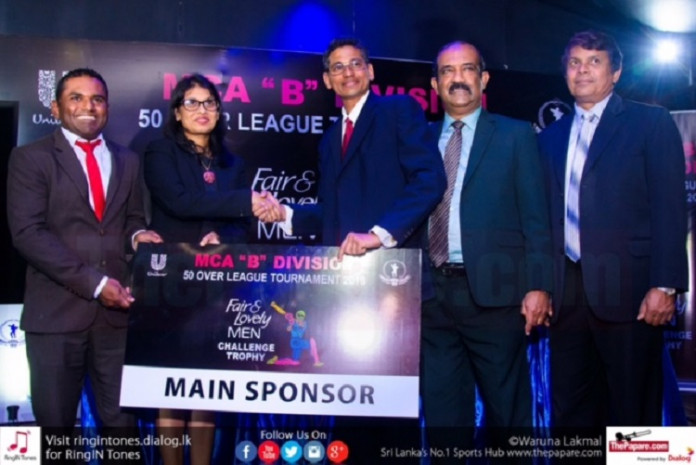 The MCA ‘B’ division 50 Over League Tournament 2017/18 conducted by the Mercantile Cricket Association(MCA) will commence on the 09th of September.

Unilever Fair & Lovely MEN is the title sponsor for this tournament which will kick off at the MCA grounds and continue at eight other selected venues with seven teams battling it out for the Fair & Lovely MEN Challenge Trophy.

Kanrich Finance emerged Champions in last year’s tournament with LB Finance finishing runners-up; these two finalists will feature in the ‘A’ Division this year.

“Men in modern era are geared to set new standards both on and off the field. On the field, they work hard to achieve their goals and do what it takes to get them there. This means the expose themselves more to sun, dust and pollution. Fair & Lovely MEN is a brand which comes in the men’s face care regime to take care of their faces from the aggressors such as sun, dust and pollution.” noted Daminda Perera- Senior Brand Manager Unilever Face Care.

The participating teams John Keels ‘B’, Powertek Cement, Mobitel ‘A’, MAS Silueta ‘A’, Singer Sri Lanka ‘A’, Commercial Credit ‘B’ and Unilever Sri Lanka will face one another in 21 matches during the preliminaries from 09th September- 04th October.

The top four teams will qualify for the semifinals scheduled for the 8th and 11th of October while the final will be played at the MCA grounds on the 14th of October.

The official sponsorship cheque handover took place during the media conference held on Wednesday the 30th of August at the Mercantile Cricket Association in  the presence of the MCA  President Niran Mahawatte, MCA General Secretary Nalin Wickremasinghe and Chairman of the Tournament Committee, Sujeewa De Silva.