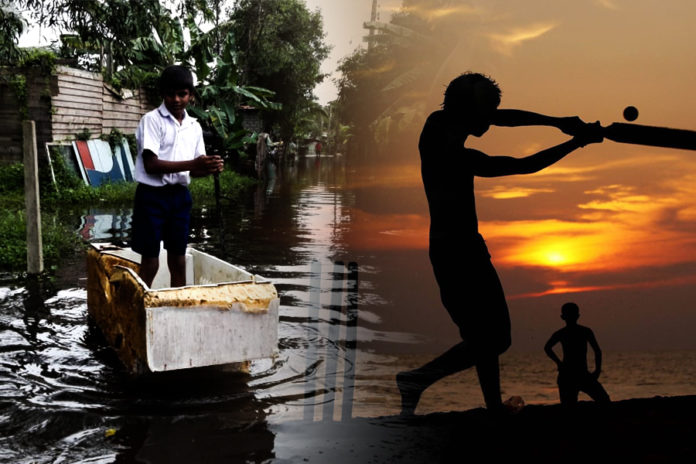 A dream gives you hope, shows your purpose, and makes you live for a tomorrow. It is the fuel that drives you through the journey to your destination. But, to some dreaming alone is a luxury that they cannot afford.

“How can I get selected to play for Sri Lanka?” asked Sidhu on a chilly Saturday morning in Colombo. I have known Sidhu as a young man part of a small cricket club, which only conducts practices on Saturday mornings from 5.30 to 8.00 am. The practices take place at a “Public” ground, which this club – made of the “Public” – has to pay a little sum for to use. The club is run mostly like a charity program for kids and youngsters who can’t afford the expensive cricket clubs and academies.

And if you are wondering why it functions at such odd hours, it is because the footballers in the neighborhood take up the entire playing area by 7.30-8.00 in the morning. This is the only grounds the club can afford with the nonmandatory fee that the club collects from kids. They barely get any game time and when they do, it’s just friendly games.

As I give some thought to how to answer Sidhu, both of our eyes are glued to the batsman in the nets. He is a Sri Lankan U19 cricketer, fully geared with shiny, new equipment, possibly from the company that is sponsoring him. He is here for a quick knock with his coach to fix a minor issue with his technique and is hitting the ball pretty hard. Sidhu’s curious questions start to pile up. “How are Sri Lanka U19 cricketers selected?”

The answer to that is simple enough, so I jump at the opportunity to skip the first question, “You are selected by your performances in Schools Cricket tournaments.” I respond, still watching that right-hander in the nets repeatedly play the short-arm jab through covers.

“My school doesn’t even play cricket, what can I do?” Sidhu blurted.

Sidhu is a willowy allrounder. He is a wristy right-handed batsman, who can bat anywhere in the line-up and a right-arm seamer, not the express speed kind, but very tidy with line and length. He delivers the ball at an angle that helps it drift sharply back into the right-handers.

“I last saw this boy when I was 15 years old and used to practice with the same coach he is practicing with now.” Sidhu continued, looking at the boy in the nets, “He and I used to be at the same level, I got him out all the time, he didn’t play my angle very well. But I quit the academy because I couldn’t afford it and he got selected for his school team. Suddenly, here he is in flashy gear, playing for Sri Lanka.”

“Why can’t you start cricket at your school? Put a team together?” I questioned.

“Well, they don’t even teach, let alone coach. One of our teachers hasn’t even finished half of our syllabus and we are sitting for public exams in a couple of months,” he replies dejectedly.

We watched the scene unfold for a few more minutes in silence and then left.

On my way back home, the thoughts of what I had just seen weighed me down. I had just seen a kid from the heart of Sri Lanka, give up a dream to be something because it just was not feasible to pursue it. Then what chance do the kids from the rural areas have?

And then I remembered, we live in a country where ministers travel in vehicles worth millions while kids walk to school in torn slippers.

Sports are of critical importance to a country’s youth, particularly in building character and team spirit. The lessons learned in sport even at a young age, often carry through to youth and eventually adulthood.

In many developed countries, sports are an integral part of the community as a whole, with every neighborhood having its own grounds and hometown teams. But in Sri Lanka, the opportunities for neighborhood youth are slim.

According to government numbers, in 2018, there were 10,175 schools in Sri Lanka. Only about 600 of them play cricket, 750 schools play football, and close to 100 play rugby. These are the most popular schools sports in the island, the less popular sports aren’t even worth the count.

Don’t the rest of these kids deserve a chance? Doesn’t Sidhu deserve one? 600 out of 10,000-plus schools playing cricket? How can that disparity be bridged? One could argue that these kids are fortunate to even get an education, forget about playing sport. But the value of sport goes beyond what meets the eye. While it adds value to life, its influence stretches into adulthood when it can provide life-sustaining opportunities.

Opportunities that kids like Sidhu don’t get simply because of things beyond their control. Until this gap between the privileged and the not so privileged is filled, there will be thousands like Sidhu who have a dream but have no way of achieving it – destined only to dream.