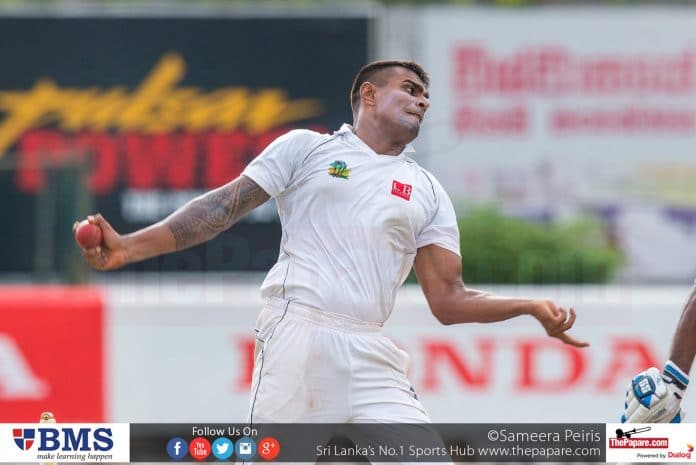 Here’s a roundup of the matches which took place today in the SLC Premier League Tier B Tournament.

Kurunegala YCC ended day 1 with their noses in front against Navy SC at Welisara today. After winning the toss, the lads from Kurunegala decided to take first lease of the wicket. A sensible knock of 84 from Hashan Prabath saw them posting 253 all out in their first innings. In reply, at stumps, the home side was already on the back foot at 6 for 1.

A five-for from Lankan CC skipper Rajeewa Weerasinghe saw them bundling out Negombo CC for just 224 runs in their own backyard. After winning the toss, Negombo CC started off well as Amila Weerasinghe and Pramith Fernando scored half centuries for the home side but the rest of the batters faltered agaisnt some good bowling by Weerasinghe and Navin Kavikara.

Lankans had the upper hand going into the innings break but they failed capitalize on the advantage with the bat. At stumps on Day 1, Lankan CC were in a spot of bother with 3 wickets down for just 43 runs.

Day 1 of the match between Galle CC and Air Force ended with the match hanging in the balance at Katunayake. Air Force won the toss and elected to field first. They managed to restrict their opponents to 178 with Sohan Rangika taking 5 for 47. The Galle batters got a few good starts but failed capitalize and make it big.

In reply, Air Force were tested by the experienced Gayan Sirisoma who bowled a brilliant spell in the final session. At stumps they were 57 for 4, still trailing by 121 runs.

A century from Kavish Naveed saw Panadura SC end day 1 with 236 runs on the board for their first innings against Police SC at Police Park. After being put into bat first, Panadura lost some quick wickets early on but a good counter attacking innings from Kavish saw them breaking the shackles and taking control of the match. He found good support from Shashrika Pussegolla who scored an unbeaten 49.