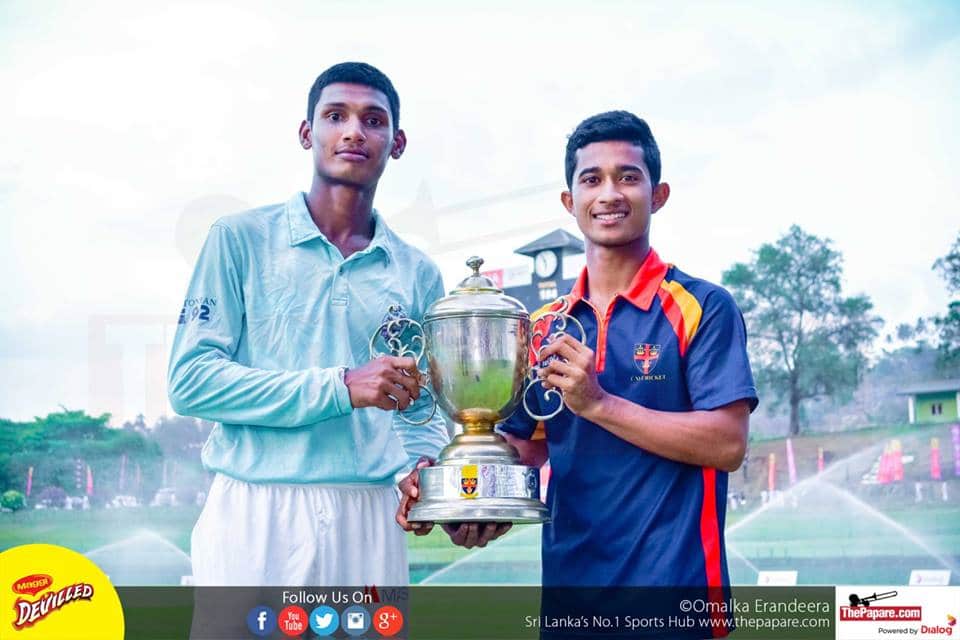 After Bowling out St. Anthony’s for just 121 in first innings and ending the first day posting a comfortable score of 146 for the loss of four wickets, the Trinitians would have definitely expected a different result on day two of the 99th Hill country Battle of the Blues encounter. But Antonian Skipper Kanishka Uggalpaya’s brilliant match saving century guided Antonians to end the match in a draw.

Trinity College started the second day sitting at 146-4 with Hasitha Boyagoda and Dilan Jayalath on strike. Dilan Jayalath couldn’t add much for the team’s total after completing his half century today. Dilan Jayalath was caught by Janidu Himsara at 54. The skipper Raveen Sayer couldn’t do much with the bat today as Virajitha Jayasinghe sent him back to the pavilion after scoring just 3 runs. The Trinitians have built a 31 run partnership for the 7th wicket between Hasitha Boyagoda and Sachira Gaminda before Sachira got out for 12 runs. After the 7th wicket Hasitha and Tashila Dodanwala made a solid 62 run partnership before declaring the innings at 251-7. Hasitha Boyagoda played a superlative knock of 55 runs in 58 balls.

St.Anthony’s  was under immense pressure when they came on to bat half an hour before the Lunch break knowing they have a tough challenge to survive against a mighty and confident Trinity bowling unit who bundled out them for just 121 yesterday.

St.Anthony’s lost their first wicket just after putting 8 runs in the scoreboard when Sunera Jayasinghe was caught for LBW by Rashmika Dilshan.

After losing the first wicket early skipper Kanishka Uggalpaya and Lakjeewa Wijebandara built a 54 run stand for the 2nd wicket. St.Anthony’s 2nd highest run scorer and vice-captain this season Mohomed Alfer put up a 31 run partnership for the 3rd wicket with Kanishka before Alfer was caught for LBW by Nushan Weerasinghe. St. Anthony’s lost their next two players to the Trinity’s Sayer – Duvindu combination which was solely responsible for demolishing Antonian 1st innings yesterday.

The Trinitians were picking up wickets in regular stages of the game. But it was the Antonian captain  Uggalpaya whotook away the win from the Trinitians.  The fourth year coloursman played a brilliant knock of 107 runs in 243 balls. He had to watch 7 of his fellow batsmen being dismissed by  the strong Trinity bowling unit. But he kept his nerve  and did not panic or rush. He played a sensible and a professional innings with patience showing the class he belongs to.

Uggalpaya’s magnificent century today will be written surely in the Battle of the Blues history books as one of the finest innings by a captain under pressure.  He was eventually caught behind by Dilan Jayalath as the 8th wicket. But he received a standing ovation for his brilliant effort to save the game for his team from the fans from both the Trinity and Antonian camps as he walked back towards pavilion.

The 99th Battle of the Blues was ended in a draw for another year and Trinity College has recorded a first innings victory. The John Halangoda Memorial Trophy now travels back to Trinity after two years.

Match was played in great sportsmanship between the players and also the supporters. No disciplinary issues were reported during these two days.

Best Bowler – Duvindyu Thilakaratna of Trinity for picking up a bag of seven wickets in the game.

Man of the Match – It was Kanishka Uggalpaya of St.Anthony’s who scored a brilliant century to steal the victory away from Trinity college.

Now both teams will be focusing attention to their Limited overs fixture at Katugastota Oval grounds on Saturday (19th). Trinity will be hoping to achieve the victory they missed today in Pallekale and the Antonians are surely be confident and ready to give a real challenge.

ThePapare.com will be bring you live coverage of the 36th Limited overs cricket encounter between Trinity vs. St.Anthony’s.