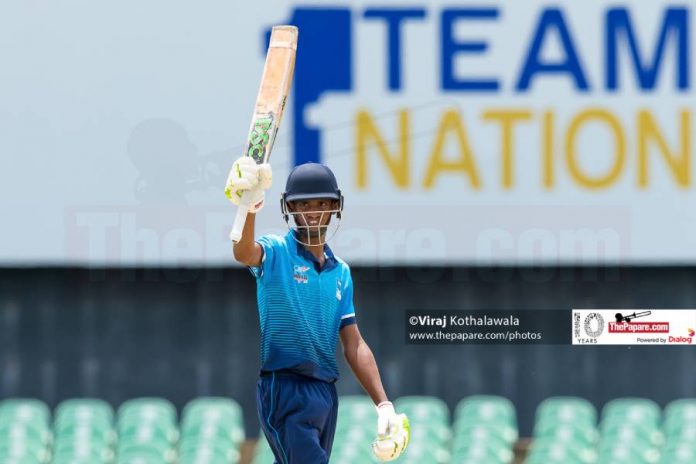 Team Dambulla was crushed by a margin of 147 runs after winning the toss and choosing to field first, curtsey of a great all-round display from Team Colombo after setting a target of 284 at Rangiri Dambulla International Stadium.

Team Colombo’s innings was solidified with a crucial contribution from the Royalist Ahan Wickramasinghe who remained unbeaten after a 73-ball 78. That was the only half century recorded for the match and a few contributions from top order and lower order carried the total to 283.

Watch – If we follow this plan for the next 10 years, our cricket will be in safe hands – Hashan

In reply, Team Dambulla openers were sent back to the pavilion before adding any runs by left arm seamer Praveen de Silva and Nalandian Chamindu Wijesinghe. Dambulla innings crumbled under pressure and never got going after that early struggle. Thomian Ravindu Rasantha was the only one to go past 30 and De Silva completely dominated the opposition with 4 wickets.

Dambulla innings ended on 136 without completing the 50 overs and Team Colombo opened their points account with a 147 run win.

Team Kandy came out victorious in a close contest by 33 runs after they were put to bat at Pallekele International Cricket Stadium by Team Galle.

Chamindu Wickramasinghe and Avishka Tharindu made the most of the scoring for Kandy with almost a run-a-ball 97 and 4 respectively as the pair constructed a 109- partnership for the 5th wicket. Thanks to their efforts Kandy total ended up at 252. Kandy couldn’t bat out the full quota of overs as Sandun Mendis and Amshi de Silva picked up 4 & 3 wickets respectively.

Read : A great opportunity ahead of Asia Cup and World Cup

Again with the ball, Wickramasinghe contributed with 2 wickets opening the bowling and batting for Kandy. No one from Team Galle reached a half century as Kandy bowlers dismissed Team Galle for 219 to record a victory by 33 runs.