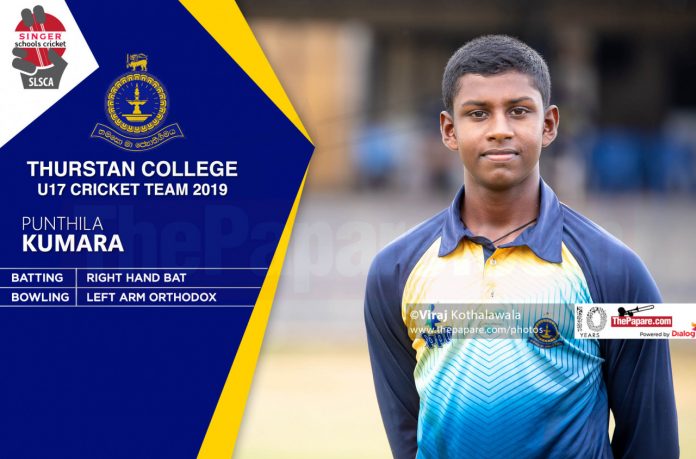 Three games of the Singer U19 Division 1 Cricket Tournament 2019/20 concluded today, 8th October, while Mahinda College and Prince of Wales College ended their traditional encounter in a draw.

Prince of Wales College won the toss and elected to bat first at the iconic Galle International Stadium.

Left-hander Tharindu Amarasinghe led the way for the Cambrians as they posted a comfortable 232 runs on the board. Amarasinghe ended his knock at 59 runs while left-arm spinner Kushan Madusha starred with the ball for the Galle school. Madusha accounted for 6 wickets giving away 67 runs.

It was a typical reply by the hosts as they batted out the whole of day-two scoring 249 runs for the loss of 8 wickets. Kavindu Lakshan was the top-scorer for Mahinda College with an unbeaten 77 runs. Kaushitha Kodithuwakku (52) supported him beautifully with a well-made half-century.

Ravindu Janith bagged 4 wickets to top the bowling card, but he had to work hard for it giving away 88 runs.

Cambrians take control on Day one

Thurstan College are hosting St. Anthony’s College in their backyard. With the moisture in the surface following the overnight showers, Thurstan skipper, Jayavihan Mahavithana won the toss and elected to field first to take the maximum out of that first hour.

Though the seamers did trouble the batsmen earlier in the day it was the left-arm spin of Punthila Kumara that did the job for the Thurstanites. Fresher, Kumara bagged 6 wickets to record his second consecutive fifer in just his second game in first XI cricket.

Thurstan College batted out the last session of the day and scored 118 runs for the loss of 4 wickets in reply. Dhananja Silva departed for 42 runs while all-rounder Avishka Vithanage scored 40 runs at the top of the order.

The Group D fixture between St. Joseph Vaz College and Zahira College in the Singer Schools ‘Under 19 Division…

The Josephians wrecked the boys from Negombo on day-one at the St. Sebastian’s College grounds in Katuneriya in this group ‘A’ fixture.

The most a Maristonian could make was 37 runs which was posted by Thilina Perera. The pace bowler for Joes, Dunith Wellalage bagged 3 wickets for 35 runs while paceman Lakshan Gamage picked 3 for 43. The boys from Darley road bowled brilliantly to put the hosts under tremendous pressure at the center.

In reply, The Josephian skipper, Johanne de Zilva (57), brought up a stroke full half-century while wicket-keeper batsman Sheran Fonseka remained at the crease with 53 runs. St. Joseph’s College ended the day with 136 runs for the loss of 5 wickets.

The traditional game unfolded at the picturesque Lake View grounds in Kandy which is the home venue of the Kandy school. Rajans won the toss and elected to field first.

The boys from Matara did a decent job with the bat posting 198 runs on the board for their first-innings. Chamuditha Dilshan’s 36 runs was the best from the Rahula College batsmen while off-spinner Sahan Siriwardena brought up his second fifer of the season.

It was with the ball that the minnows set an upset in the game as they pulled down the division-one school for 141 runs for the loss of 9 before the declaration came out.

Left-arm spin of Manuja Dulneth found to be destructive to the hosts as he went on to record figures of 6 for 26.