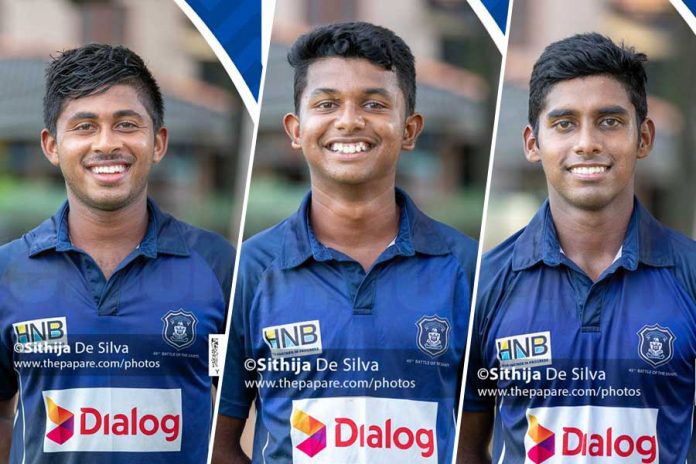 The hosts won the toss and elected to bat first, only to stage a disappointing outing as the boys from Darley road took their turn to bat just 40 overs into the game. De Mazenod College scored 109 runs in their first-innings. Senash Fernando top scored with 26 for the Mazenodians. Ashain Daniel and Shalinda Seneviratne were the stars with the ball for St. Joseph’s as the duo bowled exceptionally well in tandem to leave the home boys bamboozled. Off-spinner Daniel bagged 4 wickets for 35 runs while left-arm spinner Shalinda Seneviratne picked up 3 wickets.

The main architect of the Josephian reply was Dineth Jayakody who struck a handsome 75 runs. Miranga Wickramage, who came in late down the order, steadied the ship for the Joes when things were starting to look bad. Wickramage scored a valuable 43 runs. Young right-arm quick Sihina Sithumina registered a fifer to give hopes to the host.

Things went from bad to worse in no time for De Mazenod College as they were uprooted for 114 runs in the second-innings. Seneviratne was in the limelight once again, picking up 4 more scalps while Ashain also added another 3 to his account. Skipper Johanne de Zilva chipped in with 3 wickets with his right-arm medium pace.

Rajaguru had a fantastic game as h top-scored for St. Sylvester’s with 40 runs to his name. St. Sylevster’s College scored 184 runs in their first-innings. Thilina Perera was the star with the ball for the Negombo school with figures of 4 for 64.

Maris Stella struggled in the second-innings, falling for 152 runs. Skipper, Naveen Fernando played a valiant knock of 49 runs while it was Rajaguru again who was outstanding for the hosts as he added 3 more wickets to his tally.

The game was brought to a draw by sunset on day-two as St. Sylvester’s were stuttering at 41 for 4 in their second-innings.

D.S. Senanayake College won the toss and elected to bat first in this traditional fixture at the Dharmaraja College grounds. The boys from Colombo 07 scored 191 runs for the first-innings. Maneendra Jayathilaka top-scored with 45 runs while Upendra Warnakulasuriya ran through the D.S. batting line-up, bagging 6 wickets for 56 runs.

Dharmaraja College replied with a mountainous 268 runs. Skipper Dulaj Bandara made a stroke filled 93 runs while Dinuka Thisumitha supported him with 57 runs.

The visitors made 178 runs in the second-innings while the game came to a close by then. Abishek Liyanarachchi scored a fighting 45 runs while Chethiya Ekanayaka topped the bowling card with 4 for 25.

Subhanu Rajapaksha and Kushan Madusha bagged 3 wickets each to star in the bowling department for Mahinda College.

Mahinda was surprisingly poor in the batting as they were undone for 163 runs at which is more or less their home grounds. Kaushitha Kodithuwakku was the only one who showed intent with the bat as he ended his knock with 59 runs. Left-arm spinner Lomitha Ravindith registered a fifer for 30 runs.

The follow-on was enforced and it was another disappointing outing for Mahinda as they were struggling at 102 runs for 7 wickets when the umpires decided to take the bails off.