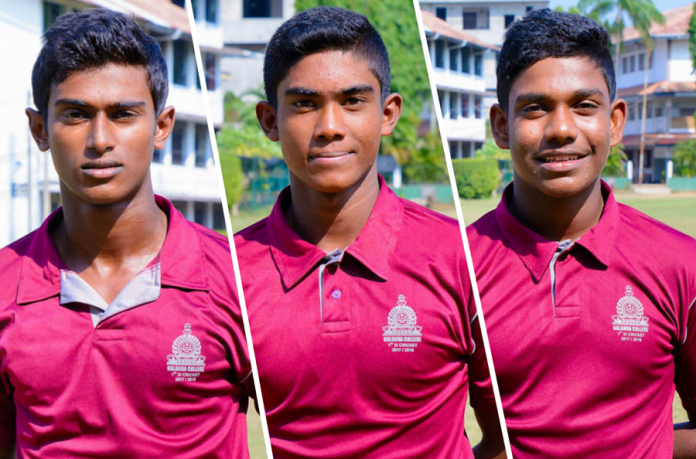 Nalandians thrashed Dharmashoka by an innings and 110 runs at their home ground while Gurukula, Lumbini and Mahinda bowled out their oppositions cheaply, to end the day on a high in the Singer U19 Division 1 Cricket Tournament 2018/19.

Dharmasoka College started the 2nd day at Nalanda College grounds on 59/3, following on, still needing 178 runs to make the hosts bat again. Sri Lanka U19 cap, right arm pacer Chamindu Wijesinghe, who picked up 4 wickets in the first innings, destroyed the Dharmsoka second innings as he went through the visitors’ batting line up in no time with 8 wickets to his name.

Dharmasoka College could only manage 127 runs  losing by a huge margin of an inning and 110 runs. The top scorer for the visitors was right hander Dinuka Dilshan who notched up 44 runs.

Previously, the Nalandians blasted a steep 329/8 as wicket keeper batsman Avishka Perera and captain Lakshitha Rasanjana made centuries before rolling out Darmashoka first innings in 22 overs. Skipper Lakshitha, leading from the front, shone with the ball too, picking up 5 wickets.

Mahinda College hosted Maris Stella College in the group A fixture and they won the toss and elected to field first. Proving their captain’s decision, Mahinda bowlers restricted the visitors to 136 runs. All-rounder Navod Paranavithana (3/35) was the pick of the bowler’s while V. Dulsara and P. Pethangoda shared two wickets a piece.

In reply, the home team put up a good performance with the bat to exploit the advantage given by their bowlers as they were 218/8 at stumps. Sri Lanka national youth caps Navod Paranavithana and Nipun Malinga led the charge with fine half centuries while Shenash Fernando picked up 3 wickets.

Group A fixture, commenced at Maliyadeva College, saw the hosts crash out for 99 as exciting left arm fast bowler, National U19 cap Praveen Nimesh picked up 6 scalps for 41 runs. Nimesh Chaturanga topped the batting column with 27 runs to his name.

Gurukula College had the edge at the final play as the visitors ended the day at 159/7. Valuable contributions came from Praveen Nimesh and Kemira Nayanatharu’s bats.

After putting De Mazenod to bat first, Lumbini bolwers did an exceptional job bowling them out for 83 runs at Sebastian grounds, Katuneriya. Main contributor to the cause was left arm spinner Ravishka Wijesiri who picked up 5 wickets for 43 runs.

Lumbini College were 156/9 at stumps, leading by 73 runs going in to the final day with top scorer Prabath Madushanka still in the crease.