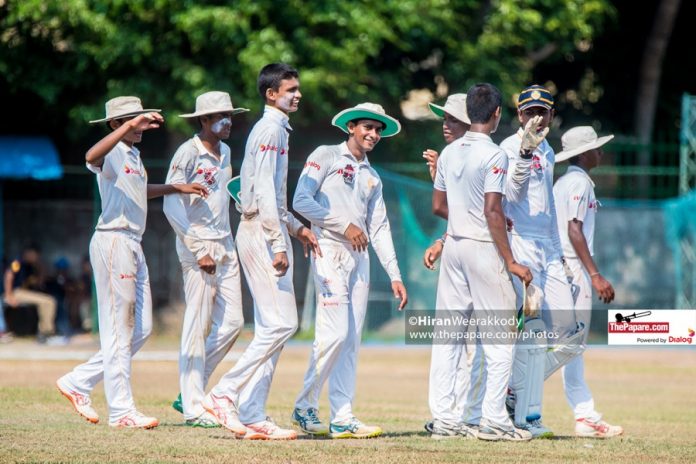 Royal College started the second day on 26 for 1, trailing by 240 runs against St. Anthony’s College’s 1st innings total with Isiwara Dissanayake and Ahan Wickramasinghe being the overnight batsmen.

Dissanayake couldn’t stay in the middle for long as he was dismissed by left arm spinner Nimnaka Jayathilaka who went onto pick up 5 Royal scalps.

But Jayathilaka’s performance was over-shadowed by the brilliant Royal batsmanship as 3 batsmen from Reid Avenue went past 50 runs.

Under 19 national cap, batting maestro Pasindu Sooriyabandara contributed to the Royal cause with a rapid half century while experienced Bhagya Dissanayake missed out on a well-deserved century by just 9 runs.

But the pick of the batsmen was Ahan Wickramasinghe who smashed a brilliant century with 11 boundaries. He ended up scoring 116 runs and helped Royal surpass St. Anthony’s College’s first innings score of 266.

Royal’s first innings was restricted to 314 by the opposition but it was too late as Royal already had secured the first innings win. Two teams agreed to conclude the match as a draw but Royal won the championship of Singer Under 19 ‘Division 2’ Two Day Cricket Tournament 2018/19 by bonus points.

Both teams had already secured their spots in division 01 next season after being qualifying for the final of the tournament. Royal College won the limited overs edition of the division 02 too.