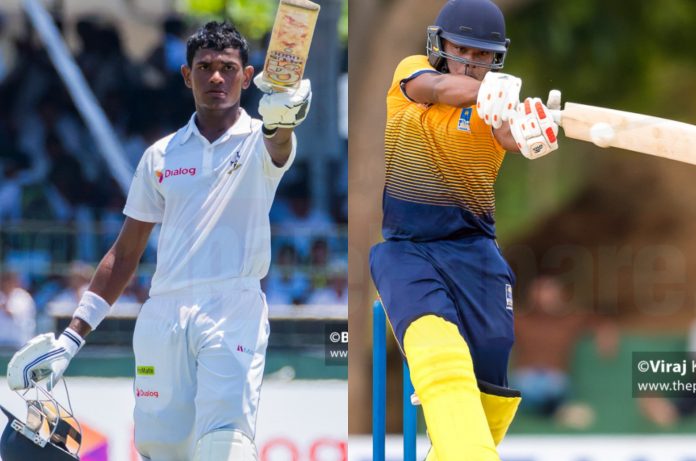 Four matches in the Singer Schools ‘Under 19 Division 1’ Two Day Cricket Tournament 2019/20 were played today across the island.

St. Benedict’s College had to satisfy themselves with a first innings win against Royal College as they missed an outright win by just 3 runs in their Group A encounter which ended today at the St. Benedict’s College Grounds in Colombo. The last pair of St. Benedict’s resumed day two but they couldn’t add a single run to the total as the hosts were bowled out for 122 runs in 48.4 overs.

Prashan Kalhara (5/37) and Gishan Balasuriya (3/29) shone with the ball, sharing 8 scalps between them for the Royalists. The visitors began their second innings 13 runs behind and declared the innings on 204 runs for 8 wickets, setting a target of 192 runs for the hosts. Thithira Weerasinghe stroked a classy knock of 71 runs for the Royalists while Akindu Karunarathne and Onila Pathirana picked up 3 wickets each for the Bens.

Chasing 192 runs to win, the hosts’ opening batsmen Sanoj Perera (78*) and Vihanga Ruwanara (70) got them off to a great start and laid the foundation for a remarkable run chase but the umpires called stumps when they were requiring just 3 runs to register an outright victory.

The Group B encounter between Dharmasoka College and Moratu Maha Vidyalaya commenced today at the Galle International Cricket Stadium. After winning the toss, the Sokian skipper opted to bat first and they managed to put 278 runs on the board before declaring the innings.

The left handed batsman Lohan De Soysa showed his class with the bat, scoring an unbeaten century for the lads from down south. Hasitha Rajapaksha also chipped in with a useful 45 runs with the bat. Eran Hansamal and Vishwa Didulana starred with the ball, taking 2 wickets each for the Moralians.

The Group B encounter between S. Thomas’ College and St. Anne’s College commenced today at the St. Anne’s College Grounds in Kurunegala. After winning the toss, the Thomian skipper chose to bat first and managed to put 252 runs on the board. The left handed stroke maker Umayanga Suwaris lit up the innings with the bat, scoring an unbeaten century for the visitors.

The left arm spinner Pasindu Thennakoon was the pick of the bowlers for St. Anne’s as he grabbed 5 wickets for 73 runs. In reply, the hosts were in some trouble losing 2 quick wickets for 30 runs at the close of play on day one. The left arm seamer Yasiru Rodrigo who played for Sri Lanka U19s in the recently concluded Tri-series in West Indies, picked up 2 wickets for just 13 runs.

Damindu Sankalpa was the chief demolisher with the ball as he bagged 5 scalps for 34 runs. In addition, Keshara Nuwantha picked up 3 wickets for just 17 runs. In reply, the visitors managed to post 142 runs for 7 wickets at the close of play on day one. Left arm spinner Kaveesha Dulanjana had a tremendous day with the ball as he managed to take 6 out of the 7 wickets that fell in the Antonian innings.