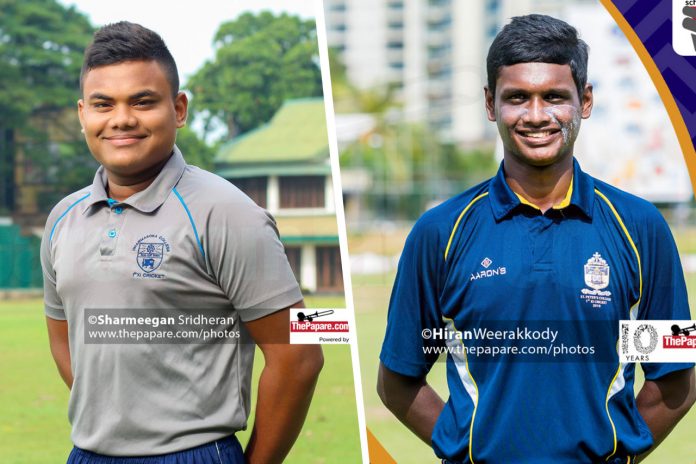 Four games of the Singer U19 Division 1 Cricket Tournament were played today, 26th December 2019, around the isle.

The boys from Kurunegala were put in to bat first by the hosts at Bambalapitiya to kick-start this group ‘B’ fixture. The Annites scored a decent 233 runs in their first-innings with the vice-captain Lasith Warnakulasooriya stroking 78 runs to top score for the visitors.

The star of the day was the Peterite spinner, Ruwin Senevirathne, who bamboozled the visitors with his sharp and accurate right-arm off-spin. Senevirathne picked up 7 wickets for 65 runs leaving the batsman completely at sea.

The home team batted 16 overs in the day and were cruising comfortably at 40 for no loss by close of play on day 1.

The group ‘C’ fixture is being worked off at the Thurstan grounds in Colombo. The hosts won the toss and opted to field first. Sri Lanka youth cap Chihan Kalindu led the batting effort for the Matara school as the left-hander made 50 runs to his name.

Left-arm spinner Hirudith Rasanjana did the most damage for the St. Servatius’ boys as he recorded 4 wickets under his name. He was well assisted by Navindu Fernando who bagged 3 wickets for 52 runs.

The visitors were bowled out for 163 runs and the day was brought to a close when the hosts were at 31 for no loss.

Nalanda College are in a comfortable position in this traditional encounter versus Dharmasoka at the Nalanda grounds. Winning the toss and batting first, the hosts posted 210 runs in their first-innings. Sri Lanka U19 representative from Nalanda College, Raveen de Silva top-scored with a patient 82 runs to his name to ensure his team had a decent total to play with.

The lone warrior from Ambalangoda did his fighting in this game too. The left-arm spinner Lohan Aroshana wrote 7 wickets against his name for 52 runs giving his team a head start. But the batting department made a mess of it as Dharmasoka College was tottering at 89 for 7 at the end of the day.

Chamodya Rajapaksha was the pick of the bowlers for Nalanda has he ended the day with figures of 89 for 7.

This group ‘C’ encounter is turning out to be a low-scoring affair as both teams managed a combined total of only 220 runs, losing 22 wickets on day one. The game is being played at the CCC grounds in Colombo where Gurukula College won the toss and elected to field first.

Mahanama College was undone for 120 runs in their first-innings courtesy some tidy bowling from Gurukula bowlers Rishitha Sankalpa, Sasitha Ashan and skipper Praveen Nimesh. Sankalpa topped the chart with 4 for 15 while Ashan and Nimesh bagged 3 wickets and 2 wickets respectively.

While this seemed to be a below par performance with the bat, Gurukula came up with an even worse display. The boys from Kelaniya were uprooted for just 99 runs. None of the Gurukula batsmen looked comfortable at the crease or batted with any real intent. Devindu Kekirideniya was the pick of the bowlers from Mahanama as he ended the day with 4 scalps under his belt.