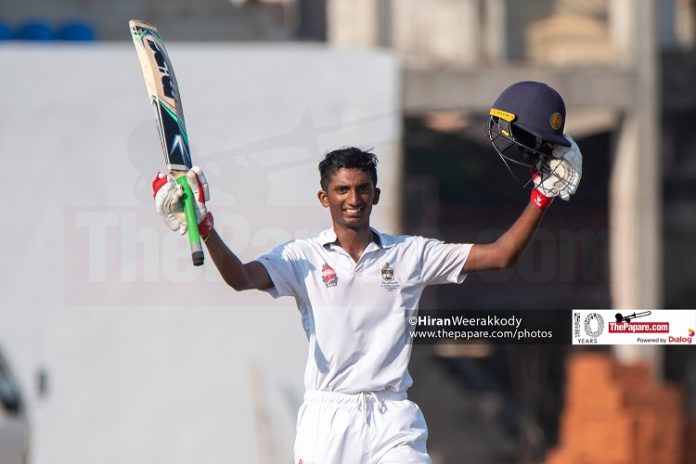 Santhush Gunatilaka reached the 1000-run mark with his 6th ton which he slammed against D.S. Senanayake College today, 23rd January, in the Singer U19 Division I Tournament. Four other games of the tournament also came to a close this evening.

Four games of Singer U19 Division One tournament ended today, 22nd of January…

The visitiors, D.S. Senanayake College won the toss and elected to bat first against the Peterites. They ended their first-innings at a healthy 269 runs. Muditha Lakshan did most of the batting for the visitors as he stroked a well-made 113-runs. Ruvin Senevirathne picked up a six-fer for his efforts.

The rest of the game was dominated by two 6-footers who has made a habit of roasting bowlers this season. Santhush Gunatilaka, well in form, brought up his fourth consecutive century to announce his entry to the 1000-run club. The national coloursman scored 122 runs taking his total to an outstanding 1017 runs in 10 games. The youngster is currently scoring at a staggering rate of 101.7 runs per innings with his highest knock being 252 runs not-out against Ananda College.

His partner Ranmith Jayasena also hit an unbeaten ton to take the team to over 300 runs. Once again, the pair kept the middle and lower orders at rest.

St. Peter’s dictated terms with the bat as they made 360 runs for the loss of just 3 wickets. The game ended in a tamed draw.

The game was worked off at the beautiful Galle International Cricket Stadium. Against the conditions of the pitch, Mahanama skipper, Pathum Boteju opted to field first after winning the toss.

However, the home team could only manage 164 runs in their first-innings. Anushka Samith was the top-scorer with 41 runs to his name. Pawantha Weerasinghe was the pick of the bowlers with 3 scalps while Banula Algawaththa and Pathum Boteju both picked up 2 wickets each.

In reply, Mahanama batsmen bettered the hosts and declared their innings at 267 runs for the loss of 7 wickets. It was impossible to keep Pawantha out of the game as the left-hander grabbed the spotlight once again as he smoked 120 runs with the bat.

Sonal Gamage of Mahanama College chipped in with four-wickets in a flash to leave the hosts handicapped. They did not survive long at the crease as they perished for just 76 runs handing an innings and 27-run win to Mahanama College.

MAHANAMA WON BY AN INNINGS & 27 RUNS

St. Servatius’ College scored 307 runs in the first-innings at home turf, after being asked to bat first. Chethaka Denuwan amassed 102 runs for the hosts while Thineth Weerasooriya grabed 4 wickets for the visitors.

The Marians were massacred for just 124 runs in their first-innings. Skipper, Gajitha Kotuwegoda managed 30 runs to top the batting card. Shashika Dulshan and Kesara Nuwantha bowled well in tandem as the pair picked up 3 wickets each.

The visitors regained position at the crease to follow-on which proved to be traumatizing for the team as they were parceled for just 87 runs. Shashika Dulshan was of too much force for the Kegalle boys to handle. The left-armer picked up 5 wickets for just 13 runs.

ST.SERVATIUS’ WON BY AN INNINGS & 96 RUNS

The Kandy school hosted St. Sebastian’s College in a traditional fixture at Asgiriya. Batting first, the hosts scored 163 runs in their first-inning. Pubudu Bandara top-scored with 53 runs while the left-armer Vinuja Ranasinghe bagged 4 wickets for 48 runs.

The leading run-scorer for St. Sebastian’s College, Dunith Jayathunga added 90 runs on the board. The visitors replied with 181 runs in their first-inning. The man with the golden arm Kavishka Senadeera was once again, brilliant with ball as the off-spinner returned to the hut with 6 wickets under his belt.

Trinity College put up a better show in their second-inning as they ended the game at 198 for 5. Ranuda Somarathne (83) and Avishka Senadeera (60) scored half-centuries for Trinity.

Gurukula College won the toss and elected to field first in the tournament fixture at Hambantota. The boys from Negombo hit 197 runs in their first-inning. Ravindu Fernando reported for duty again as the right-hander made 68 runs for Maris Stella. Experienced Praveen Nimesh picked up 3 wickets for 27 runs.

Kemiru Nayanatharu powered the Gurukula innings as he made 103 runs, earning valuabble points for his school. Gurukula College scored 202 runs in their first-inning; Ravindu Fernando was the pick of the bowlers as he picked up 3 wickets for 46 runs.

Maris Stella was bothered in the second-inning as they were at 130 for 9 by the close of play. Likshan Sasanga picked up 4 wickets for 27 runs.