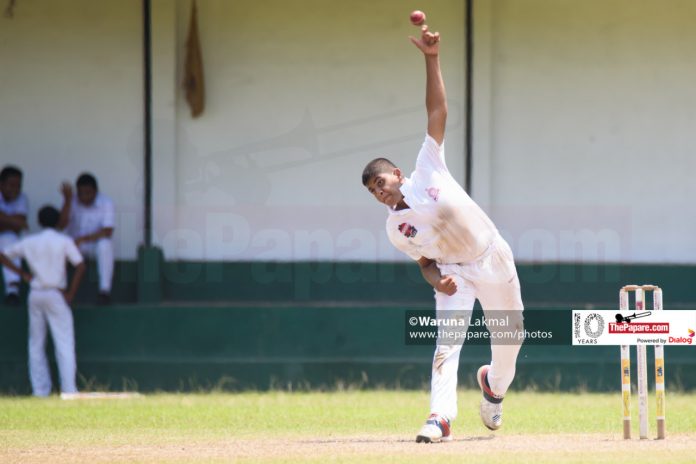 The game was played at the Nalanda grounds in Colombo where the visitors won the toss and elected to field first.

Jithesh Wasala smacked 88 runs to give Nalanda the kind of base they required to rout the Kandy school. Skipper Avishka Perera scored 63 runs at the top of the order to ignite the innings. Kavishka Dilshan was the pick of the bowling for St. Sylvester’s College with 4 wickets while Shashika Basnayake bagged 3 scalps.

The boys from Kandy were undone cheaply in the first innings courtesy tight bowling from the Nalandians. The pick of the bowling was the newbie, Nalanda left-arm spinner Sajitha Vithanage who recorded the first hat-trick of the season. He picked up 4 wickets as St. Sylvester’s managed only 70 runs for the first-innings and was pressed with the follow-on.

Vithanage came in even better in the second lease, picking up 6 more wickets wrapping up a match-bag 10-wicket haul. The visitors could only make 171 runs in the second-innings too. Nalanda College won the game by an innings and 20 runs.

The game is being played at the De Mazenod grounds where the Matara school won the toss and decided to field first.

The Mazeniodians scored 224 runs in their first innings, batting out half of the day. Chiran Meththaru picked up 4 wickets for 16 runs.

St. Servatius’ College ended the day at 119 for 6 wickets in their first-innings. Skipper Keshara Nuwantha top-scored with 54 runs.

Defending U19 champions St. Joseph’s College were deprived of a victory against Maris Stella…………

The two schools are locking horns in a group ‘A’ fixture at Dombagoda, where the team from down south won the toss and elected to bat first.

It wasn’t a convincing outing for the Galle school as they were wrapped up for 181 runs. Ravindu Kanchana’s 36 runs was the top-score of the innings. Left-arm spinner Gishan Balasooriya led the Royal bowling with figures of 4 for 30 while fellow left-arm spinner Manula Perera and paceman Kaushan Kulasooriya picked up 2 wickets each.

It was a rather forgettable performance with the bat at the start of a brand-new season for Royal College as the boys from Reid Avenue were in trouble at 97 for 7 at close of play.

Fast-bowling all-rounder Kavindu Pathirathna was holding the innings from one end with 43 runs to his name. Seamer Niduka Malsith starred with the ball for St. Aloysius’ College as he picked 3 wickets for 18 runs.