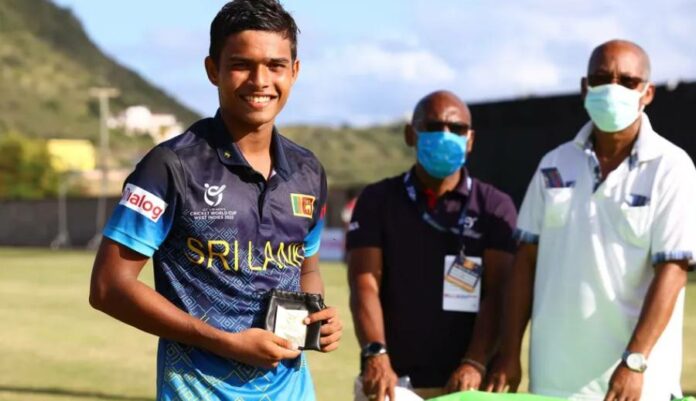 Teague Wyllie and Campbell Kellaway opened the innings for Australia, but they couldn’t get a good start as the former was dismissed by off spinner Mathew for just 6 runs. Mathew struck once again, taking the second Australian wicket in the 14th over.

The Australian middle order batters tried to rescue the innings in the middle overs but Sri Lankan skipper Wellalage who took a 5-wicket haul in the last game, once again came to the party, taking three quick wickets inside 4 overs, putting the Aussies on the back foot at 6 for 112.

Wellalage continued to pile misery on the Australian batters as he took his second 5-wicket haul in this year’s world cup to restrict the opposition to 175. Wellalage ended up with match figures of 5 for 28 while Mathew and Matheesha Pathirana chipped in with 2 wickets each.

Chasing 176 to win, Sri Lanka got off to a shaky start losing the top three batters inside the first 8 overs for 41 runs. When Sri Lanka were reeling at 4 for 49, Wellalage and wicket-keeper batter Anjala Bandara built a match-winning partnership for the fifth wicket adding 70 runs off 86 balls, helping the islanders to get over the line without any further hiccups.

With this win, Sri Lanka march closer to securing a quarter final berth in the tournament as they have registered 2 wins out of 2 games played so far and managed to top the Group D standings. This win against the Aussies is even more significant for Sri Lanka U19s as it is the first time they have beaten the side in Youth World Cups since 2008.

The door is still open for all top 3 teams in Group D, Sri Lanka, West Indies and Australia to finish in the top two and secure a place in the Quarter Finals. Sri Lanka’s next game will be against West Indies on 21st January at the same venue.

Sri Lanka U19 won by 4 wickets