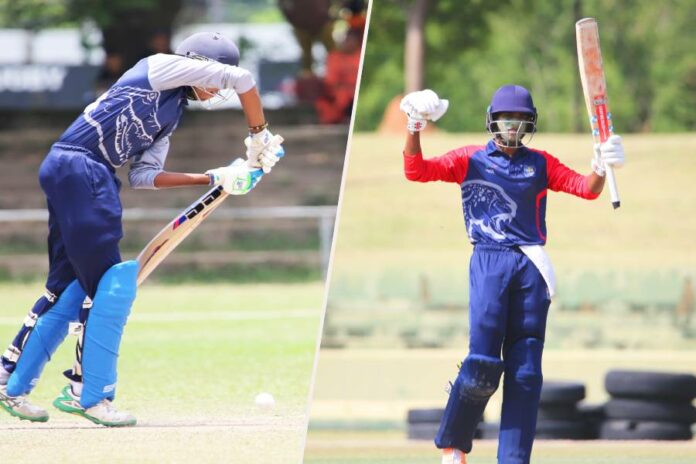 Galle & Colombo North registered wins on the fifth day of the Under 17 Sri Lanka Youth League played on the 28th of August at RDICS, Dambulla and Welagedara Stadium, Kurunegala respectively.

Galle registered another victory today after beating Kandy by 4 wickets. Kandy who won the toss opted to bat first and made 242 after getting bowled out in the last over. Opening batsman, Supun Waduge top scored with 78 off 106 deliveries while lower order batter Manula Kularatne hammered an unbeaten 50 off 44 deliveries. Leg spinner Sadew Gamage who bowled an economical spell took 3 for 26 while right-arm pacer Sanju Dilshan also took 3 wickets for 47 runs.

In reply Galle came out all guns blazing as they never gave Kandy a chance to slow the game down. 3 out of the top 4 scored half-centuries for them and 2 of them batted with a strike rate of over 100. Ravishan Nethsara went berserk as the number 3 scoring 56 off 37 balls while opening batter Dinura Kalupahana who played a much calmer knock scored 73 from 87 deliveries. The highest scorer for Galle, Dinura Abeywickrama smashed a phenomenal 78 off just 51 deliveries. Thanks to these 3 knocks Galle reached their target in just 36.5 overs. In bowling, Akila Wickramasinghe looked like the only threatening bowler taking 4 wickets 43 from his full quota of 10 overs.

In the other encounter of the day, Colombo North completely demolished Dambulla to win by 8 wickets. Dambulla who won the toss and decided to bat first were never really able to get going as Garuka Sanketh & Thanuga Palihawadana completely bamboozled their batting. Sanketh took a well-deserved fifer to end up with figures of 5 for 27 and Palihawadana took 3 for 24. Dambulla opening batter, N. Ebanaser tried his absolute best to settle the ship but unfortunately, it was too much of a task for the youngster who scored 48 of 73 balls.

Chasing a modest target of 118, Colombo North reached the target after losing just 2 wickets. Opening batsman, Sahan Dabare top scored to marshal the chase with an unbeaten 57 from 77 deliveries as they needed only 29.4 overs to achieve the target.