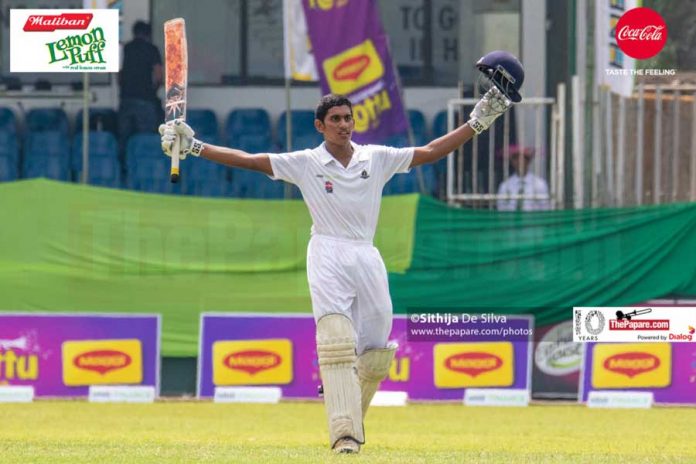 The day started with Thusrtan College on 130/5, replying to Isipathana’s 1st innings of 210 with Bawantha Jayasinghe who picked up 4 wickets in the Isipathana 1st innings and last big match’s centurion Ranesh Silva, on 55 & 9 respectively.

With 27 overs to play in their restricted 60-over innings, in form Bawantha Jayasinghe used it for the maximum advantage as he went on an attacking knock to erase the Isipathana’s 1st innings total and add another 69 runs to the lead. Jayasinghe’s innings was included 9 boundaries and 4 sixes as he matched his father’s feat of making a century in the battle of the brothers. This was all-rounders first century of the season.

He was well-supported by the tailender Thineth Prabuddha who blasted a 32-ball 36 midst Jayasinghe’s carnage. Thurstan College completed their 60-overs for 1st innings with 284 on the board. On the bowling front, Dinath Dissanayaka and Ravindu Rathnayaka shared 3 wickets between each other out of the 9 wickets fallen.

With a deficit of 69 runs, Isipthana College openers, specially Thevindu Dickwella showed intent, being adventurous with the bat, but his brief innings was ended when he was on 13.Skipper Leshan Amarasinghe soon followed him being trapped in front of wicket on the pad for 25.

Regular opener Saveeb Dantha didn’t come to bat as he injured himself in the field.

Isipathana supporters had their hands on the their heads, when Ravindu Rathnayaka played a rash shot, presenting a comfortable catch to the slip Fielder; Dhanaja Silva but he dropped it.

From then on Rathnayaka played a brilliant match saving innings to carry Isipathana College to safety, assisted by Lisura Vinath who had an unbelievable patience, making 38 off 160 balls.

Rathnayaka missed his century by 13 runs but he had already done a fantastic job for his alma mater. Isipathana College concluded their innings on 205/4 at the stumps, adding another drawn contest to the folklore of the Battle of the Brothers.

Stay logged on to ThePapare.com for LIVE coverage,  Photos, articles & latest updates of all the big matches in the March Madness 2020.