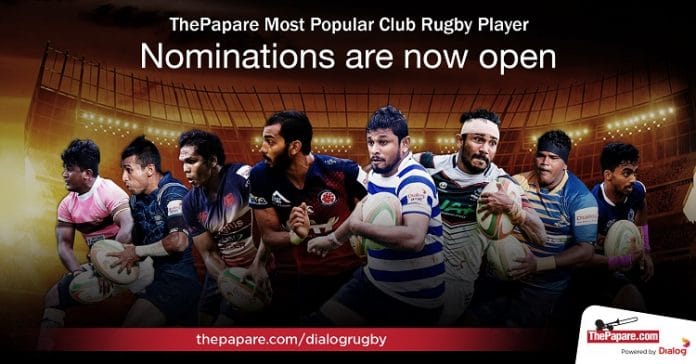 For the third successive year, ThePapare is pleased to announce that ThePapare Most Popular Club Rugby Player contest will be alive once again as we welcome nominations for the award.

Introduced in 2015, the award is given out to the most popular rugby player who has made a considerable impact during the Dialog Rugby League standing out as an eminent figure throughout the season. Previous winners of this award have been Rochana Hettiarachchi of CR & FC in 2015 and Dulanjana Wijesinghe of Navy SC in 2016.

This year, we invite the fans to submit their nominations of who they think is deserving of the title. The nominations can be submitted on the Dialog Rugby HUB. Any person has the privilege of submitting a nomination and there is no restriction to the number of nominations that one person can submit.

In order for your nomination to be valid, the nominated player should be included in the listed squads for the Dialog Rugby League 2017/18.

Get match updates, breaking news, features and many more delivered to your fingertips as it happens…