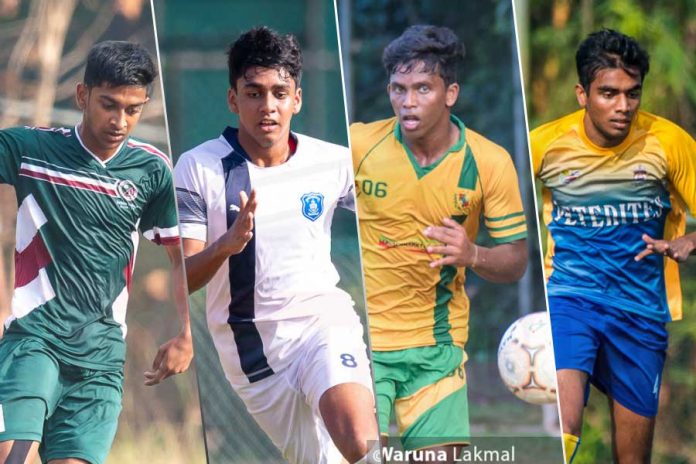 ThePapare Football Championship 2019 has reached the penultimate round for the year 2019, with the highly anticipated tournament semi-finals ready to be worked off on the 19th of February 2020 at the Race Course International Stadium.

The Battle of the Saints is the first Semi-Final, which is also a repeat of a Quarter Final from last season’s tournament. The Josephians came back to win 2-1 and went on to win the ultimate prize in the Finals.

This year the Joes had a difficult task in the group stage as they had only 1 point in 2 games and were lying at the bottom of the table. 2 must-win games in the remaining matches and one against Jaffna Central College in Jaffna looked impossible.

True to their form as defending champions, the Joes went on to beat Jaffna Central 2-1 in Jaffna and in the following week beat Kingswood College in Kandy 4-1, not only qualifying but taking the top spot in the group.

In the quarter-final against St. Henry’s College Jaffna the Joes were comfortable winners by a margin of 4-1. Shenal Sandesh grabbing a hat-trick in the process.

Sandesh will be the player to watch out for as he leads the goal scorers list in the competition with 8 goals coming into the semis. Also key to Joe’s success will be the experienced pair of Chalana Pramantha and Marshal Kodikara. Kodikara missed the last 2 games due to injury and Joes will be hoping he will be ready for the Semi-Finals.

St Peter’s College had their fair share of luck as well in the ‘Group of Death’ which consisted of Hameed Al Husseini, St Henry’s College and Baduriya Central. Having lost the first game and a drawn against Hameed Al Husseini, the Pete’s were at the bottom of their group coming into the final game. In must win game against Baduriya, the Peterites went on to win 3-1 scoring 3 goals in the last 10 minutes.

The quarter final against Jaffna Central College was another block buster with the Bamba boys winning 6-4. They scored 4 goals in 16 minutes to turn the tie around after trailing 4-2. Shabeer Razooniya grabbed the headlines with a hat-trick.

The Sri Lanka cap Razooniya will be the player to watch out for in the semi-final along with Sri Lanka U19 squad players Mohamed Ihsan, Arjunan Praveen and Akeel Nizar. Malindu Athukorala, Sri Lanka U16 player, too will play a key role as he did in the Big Match last year when he won the Best Player award.

St Peter’s will be looking to rewrite history books as they too boast 2 titles which they won way back in 1996, winning the U18 Division 2 title and 2008 where they won the Division 1 title beating Zahira College 2-0.

This is another repeat of last year’s quarter final; St Patrick’s blew away Zahira College in the first half taking a 3-0 lead on that occasion but Zahira returned the favor and tied the game 3-3 at full time. The Patricians eventually came up trumps in the penalty shootout. They finished third overall after losing the semi-finals to Hameed Al Husseini and beating Maris Stella College in the play-off final.

This year the Patricians topped their group with 3 wins and a draw. They thumped Dharmadutha College 6-0 to leap frog De Mazenod College to top the group on goal difference.

In the Quarter Finals Al Aqsa National School Kinniya gave them a good fight but they eventually won 3-0 to set up another cracker against Zahira College.

Rajikumar Shanthan, who played the last year tournament, along with Nirmala Cristeepan will look to dictate terms. With Nageswaran Baviraj and Aniston Sharon being lethal in front of goal, the Zahira College defense will have their work cut out.

St Patrick’s have come close on several occasions to winning the senior title and would hope that this year is their year.

Zahira College, the ‘Kings of Schools Football’ were the pre-tournament favorites and have lived up the tag so far. Smarting from the exit in last year’s quarters, the Maradana lads will want nothing short of the title.

The group stage was a breeze for the greens as they won all their matches with ease and exhibited a super brand of football. Gateway College, St Benedict’s College and Al Aqsa were no match for Zahira as they booked their spot in the quarter finals.

De Mazenod College stood in their way and a well contested encounter went the way of Zahira College as they won 3-0.

Sri Lanka cap Mohamed Aakib is leading the lines for Zahira and has scored 5 goals in the tournament. He will be ably assisted by Sri Lanka U19 players, Mohamed Sajid, Mohamed Mushfir, skipper Rumy Raza and goalkeeper Mohamed Shakir. The star studded Zahira College team will look to create history by winning the U20 title for the first time.

Last time Zahira won the Sri Lanka Schools senior title was the U19 Championship back in 2015 where they beat St. Peter’s College 2-1.

Don’t miss the action from the two semis LIVE on ThePapare.com!

Don’t miss the action from the two semis, LIVE on ThePapare.com!