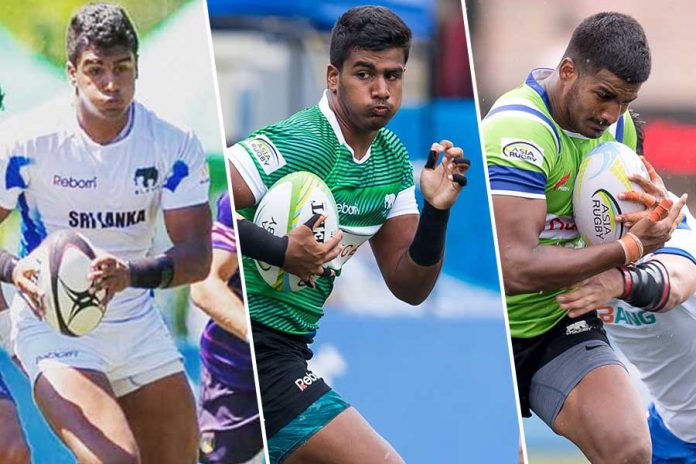 Team Sri Lanka had just made it on to the playing turf at the Hong Kong Football Club in Hong Kong for the first leg of the Asia Sevens Series. A fortnight ago, the Sri Lanka Rugby team had been deprived of a medal at the Asian Games after a close call against Japan and later being overcome by South Korea for the Bronze.

Amongst the lads in the green-striped jersey is an unfamiliar figure, at least at this level. Standing tall at 6’2, this newcomer has been handed a starting number by the coaching staff for Sri Lanka’s series opener against China.

Four minutes into the game, the quick-footed Srinath Sooriyabandara, captaining the team in Muthuthanthri’s absence, sends a short pass to him. The big six-footer twists and turns, wards off a Chinese player and crashes through the midfield to score the opening try for the Tuskers and his first ever in the national jersey.

It was a DREAM DEBUT!

Nobody could have asked for a better start than what the 20-year-old Dinuk Amerasinghe got off to in Hong Kong. The setting was perfect, a start in his first ever sevens game for the country and scoring the first try for the country in the series.

Go back six weeks, the Sri Lanka U20s were battling out to bring home their second Asia Under 20 sevens series. The team was formed out of the best schoolboy talent in the country and the former St. Anthony’s captain Dinuk Amerasinghe was returning for his second stint in the junior jersey.

Until then, the schoolboy from Kandy had had his fair share of schools rugby action and was recruited by the Havelock Park Club to play but nobody had seen his true potential till then.

The rains came pouring down at King’s Park unexpectedly with Sri Lanka trailing at halftime. With one look at the opponents under the heavy downpour, the twenty-year-old tore the Chinese defense apart scoring two tries in quick succession and leading Sri Lanka Rugby to a deserved first win.

Team Sri Lanka, however, didn’t make it to the finals, nor did they win any silverware but all who logged on to ThePapare’s live telecast from Hong Kong saw the emergence of this wonder kid.

When Amerasinghe was shortlisted to attend national training following the 2018 Asia Under 20 7’s stint, little did he know that he would be making his national debut shortly after. Coach Peter Woods, seeing the potential in this lad, was on his case to make sure that he would see him in the national jersey during his tenure.

Amerasinghe went on to score four tries in the opening leg of the Asia Sevens Series 2018 with two important scores in the Chinese Taipei game on the second day. He ended us second in the top try scorer’s list at the end of the 1st leg.

When he first made it to national practices in 2017, the 19-year-old was a determined character with his eyes fixed on the Tuskers jersey.  In early May, it was a triumphant moment to see his name on the list that was picked in a wider training group to travel to France for the Paris World Games tournament.

Unfortunately, fate decided that he would not make it to Paris but that he would have to wait for his maiden national game until later this year.

Only a few players have the privilege of having a dream debut in national colours. Hong Kong’s Max Denmark is someone who was fast-tracked to the national team. Playing in the under 20 sevens and fifteens’ last season, Denmark was shortlisted to represent the national side this year. Long story short, Denmark made it into the Hong Kong team to the Rugby Sevens World Cup and was a part of the team that won gold at the Asian Games, a dream come true for any youngster.

Others who have made this journey in Sri Lanka are Naveen Henakankanamage, Kevin Dixon and Omalka Gunaratane, who have equally intriguing stories to share.

To play alongside the likes of Gayan Weeraratne, someone who the schoolboy Dinuk would have watched gleefully from the stands at Nittawela, would have definitely been a dream achievement.

With perseverance, someday maybe  Amerasinghe will also hold the gaze of a budding schoolboy as he continues the legacy of the #12 jersey, he certainly has made a promising 1st stride in his journey!

Read Next:  7 things we know after the Asian games rugby sevens