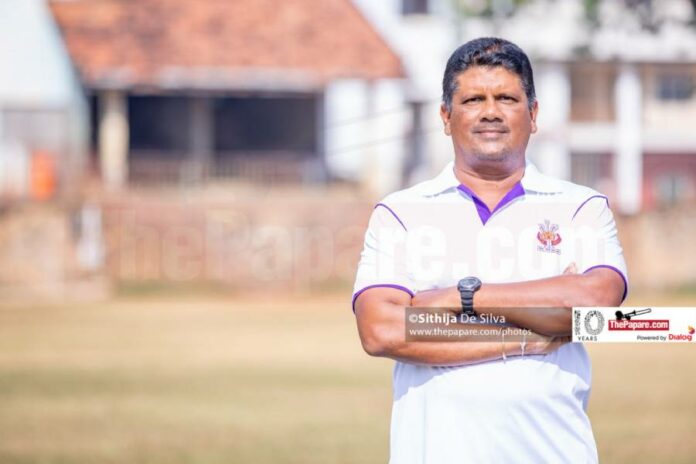 Quietly, sit next to a coach giving a pep talk to Under-13 cricketers before a game and you will be left with anger and bewilderment as you eavesdrop.

Coaches teach young kids some new tricks in the trade. ‘Appeal three times vociferously and there’s a good chance that you will get a decision in your favour that would have been otherwise given not out.’ That’s the current status of our school cricket. But then, there are also the rare coaches, the Lucky Rogers type. Here’s the Lucky Rogers story.

Ananda College had had a terrific season in 2009 having won 12 games. They were skippered by Dinesh Chandimal. The title was going to be decided in the crunch game between Ananda and Royal at Ananda Mawatha. Royal had KJP. Ananda were set to secure the title after being set a paltry target of 80. But cricket is a funny game. Ananda were shot out for 78. Ruchira Palliyaguru, currently an international umpire had given five leg before wicket decisions!

Read – A rare gem snatched away from us

Well, the obvious choice is to nail the umpire. The term ‘umpire hora’ is common in our backyard. Five leg before wicket decisions in a crunch game! But Ananda boys played like gentlemen. Their coach Lucky Rogers had instilled in them that discipline and set the standards.

“To be honest, I expected a bit of bad blood. But to my surprise, every Ananda player walked up to me, shook hands and said ‘good game sir.’ Palliyaguru told The Island.  ‘Then followed Ananda coach Mr. Lucky Rogers. He shook my hands and said thank you. That’s all. What a gentlemen.’

You don’t get many gents like Lucky Rogers. Ajantha Mendis played little cricket at school and his talent was spotted by Lucky Rogers at an academy.  The rest they say is history as Mendis gave us some memorable moments running through India’s famed batting line up comprising Sehwag-Dravid-Sachin-Ganguly-Laxman.

The legend of Lucky Rogers is not associated with just coaching. He was a legend as a player too.

“I won the outstanding schoolboy cricketer of the year award (outstations) in the year 1988 and Lucky Rogers won  it after me in 1989,” said Sanath Jayasuriya speaking to The Island. Well, that sums up the story.

Read More – The rise of Bawwa

Here’s bit of stats to drill Lucky Rogers greatness. He hails from Moratuwa. The famed cricket pillars of Moratuwa are St. Sebastian’s’ and Prince of Wales. But there’s a third force. Quite formidable one too; Moratu Vidyalaya. Lucky Rogers captained them at under-13, 15,17 and 19 levels. In his last year, he finished off with 1493 runs, in just ten games with an highest score of 264 not out. If you know bit of school cricket, those are stunning numbers. Not even matched by The Greatest; P.A. de Silva. Nobody else reached 1000 runs that season. Lucky did it in seven games. Mind blowing stuff.

Lucky Rogers was not just a stylish top order batsman. He  was also a superb wicketkeeper. Highly rated by his contemporaries, hardly committing a blunder behind the stumps. When he opened batting, he  was a class act, with an array of attractive strokes.

“I captained Sri Lanka Under-19 team to Bangladesh for the Asia Cup. We lost the finals to India captained by Sourav Ganguly. Lucky Rogers was a key figure in that side as we performed consistently well.  When in the mood, Lucky could put best of bowling attacks to the sword,” recalled another Sri Lanka captain; Marvan Atapattu.

When Lucky Rogers got out of school, he was quite popular in the domestic circuit piling up runs for Moratuwa Sports Club. He made quite an impact as captain too as Moratuwa were promoted to Premier League from Sara Trophy. Lucky was  jack of all trade; team’s  leading batsman, wicketkeeper and skipper, who had the knack to make things happen, despite having limited bowling resources.

“Well, there were financial constraints facing my family and I decided to play league cricket in Australia so that I could earn a living by playing the sport and look after my family. I guess I missed out because of that,” Lucky Rogers told The Island.

Lucky represented North Cofield for seven seasons and won the Victorian Championships twice. He is hailed down under in cricket circles as much as here. Lucky credits the values he brought to the game thanks to the coaches he had; Mr. Bernard Perera, Mr. Chandana Mahesh and Mr. Manjula Peiris. It reiterates a very pertinent point, the need to have quality coaches at school level.

Lucky Rogers is an example that you don’t have to play for Sri Lanka to leave an indelible mark in the game. He championed the cause of not so fancy teams as a schoolboy and in domestic cricket and later on when he took to coaching he taught the players finer points of the game, but more importantly to play the game in the right spirit. Men like him are rare and need to be celebrated.