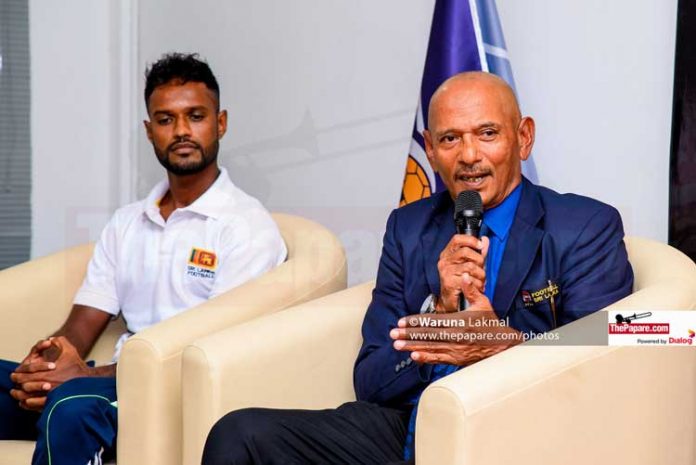 After a dismal display against India at the ‘SAFF Suzuki Cup 2018’ opening game, Coach Nizam Packeer Ali addressed the media.

Sri Lanka lost 2-0 to a youthful Indian outfit. The team performance was questioned by the media at the post match brief with head coach Nizam Packeer Ali.

Reporter: What are your thoughts of the game?

“Team didn’t play well, to be honest. They got excited playing against a team like India. However the boys worked hard, they lost possession going forward and got caught on the counter attack. We have time, we have another match, we can do something”

Reporter: If we win the next match do we have a chance of reaching the semi-finals?

“Yes for sure we have a chance”

Reporter: For the next match are you planning to change the team? Why was the captain withdrawn from the match?

“His fitness level was down, whether he’s captain or not, I had to change things. When the pressure came from his side he couldn’t handle it. So I had to make the change.”

“Now we will try rectify our mistakes from this match and we will go for the next game. I’m quite sure the boys will play well in the next game. They don’t intentionally play bad”.

“In football there is this excitement and playing with India, they have played international matches and been in training close to a year”

Reporter: Indian team is youth team, but you have trained well in Korea and Japan prior to this match?

“I have to say even though this is a youth team a lot of them play in the ISL. There are Under 23 and even under 19 players playing in the ISL. They have a lot of experience playing matches.”

Reporter: The goalie made a lot of mistakes. He got warned and later yellow carded for time wasting. Are you going to play him against Maldives?

“See, to score a goal, 10 other players have to be beaten. We can’t say all 10 played badly. Second goal was his mistake. Yes the yellow card was unnecessary. This does affect the team performance and the player.”

“He is an honest player. In football the goalkeeper makes mistakes. We shouldn’t forget he made two or three saves too.”

Reporter: Is it a problem playing him against Maldives since he plays for a club in Maldives?

“No it’s not a problem. It’s a challenge for him to face Maldives. He has to show that he is playing for his country and he doesn’t support Maldives despite playing for a club there. It’s good for his career.”

Reporter: What is the challenge against Maldives? Are you going change anything?

“We have to win against Maldives; today the team didn’t play well. Our attackers didn’t finish the moves we had too many missed passes. We will rectify our mistakes against Maldives.