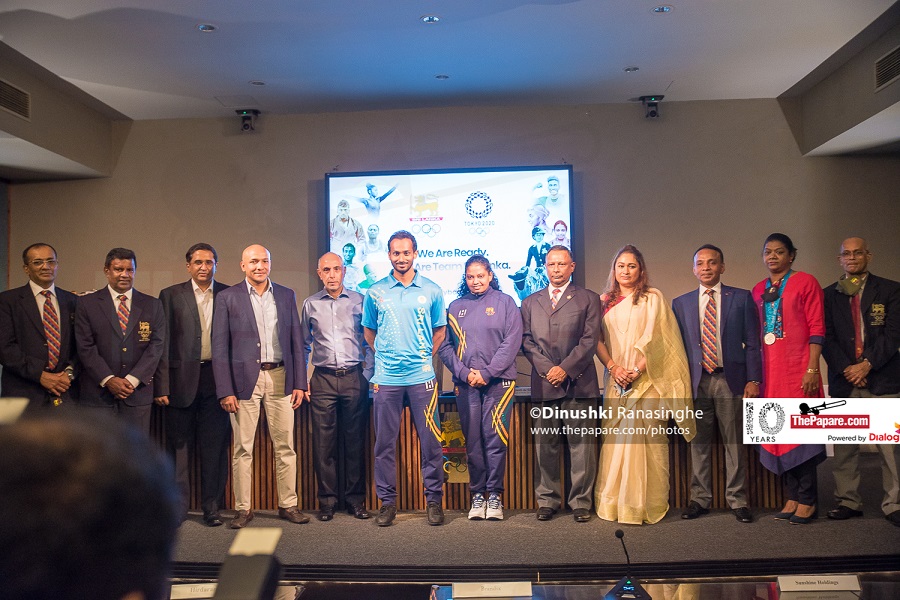 Today, 8 July, a media conference was held by the National Olympic Committee (NOC) to officially announce the nine athletes who will be representing Sri Lanka in 8 sports at the 2020 Tokyo Olympic Games which will be held from the 23rd of July to the 8th of August.

Olympic silver medalist from the Sydney Games in 2000, Susanthika Jayasinghe graced the occasion along with NOC President Suresh Subramaniam, General Secretary Maxwell De Silva and many Exco members and official members who will travel to Tokyo for the Games as CDM, Press secretary etc.

Nine athletes, nine dreams, a lifetime in the making. This may sound like a cliche but for Team Sri Lanka and indeed their contemporaries the world over, it is a reality.

For an athlete there is no greater feeling than representing your nation and the Olympic Games embodies the pinnacle of that achievement. An event that allows you to showcase your talents to the world, and one where success is more than just about winning.

Indeed, many of us may never truly understand the sacrifice, desire, will power and sheer unbridled determination that goes into becoming a professional athlete; suffice to say being good enough to compete at the Olympic Games is an achievement in and of itself – something that was given an added twist this past year.

The coronavirus pandemic has put forth barriers that these athletes could scarcely have imagined – athletes after all are creatures of habit, of routine, the very things the pandemic has put to paid to – yet they have defied all odds. This has by no means been an easy road.

Some like swimmers Matthew Abeysinghe and Aniqah Ghaffoor have had to qualify through invitation places; both were unable to train and compete because of the pandemic, but thanks to the intervention of the NOC Sri Lanka on their behalf, and their achievements in years past, the IOC granted both invitation place entries.

Not competing in the Olympic Games would have been a travesty for either one of them, considering the esteem in which both are held. Abeysinghe is already one of the most accomplished athletes in the country and is the only Sri Lankan swimmer to achieve an Olympic qualification standard. Gaffoor meanwhile, at the tender age of 17, already boasts the national record in the 50m and 100m Butterfly.

Gaffoor is in fact one of the five female athletes representing Sri Lanka at Tokyo 2020. Of the others, Equestrian Mathilda Karlsson was the first Sri Lankan to qualify for these Olympic games, with all of Sri Lanka no doubt brushing up on their Show Jumping knowledge.

Artistic Gymnast Milka Gehani meanwhile was awarded one of the two available Asian Continental berths to the Olympic Games due to the cancellation of the 2021 Asian Championship, as she was the highest ranked eligible athlete based on the results of the 2019 World Championships.

Both Karlsson and Gehani are also the first Sri Lankans to represent Sri Lanka in their respective sports.

On the men’s side, aside from Abeysinghe there is the veteran Badminton champion who will be taking part in his third Olympic Games, South Asia’s fastest man sprinter Yupun Abeykoon and National Judo champion Chamara Nuwan Dharamawardhana, who will be competing in his second Olympic Games.

While this is not the largest contingent Sri Lanka has ever sent to the Olympic Games, it is among the most accomplished. The NOC of Sri Lanka too has done its part in looking to ensure the best the country has to offer are able to compete, despite the numerous challenges these athletes have faced over their careers.

For the first time ever, ThePapare.com will be traveling to Tokyo city to cover the Olympic Games! So, keep it logged to www.thepapare.com/olympics for results, news, schedules, photos and more!