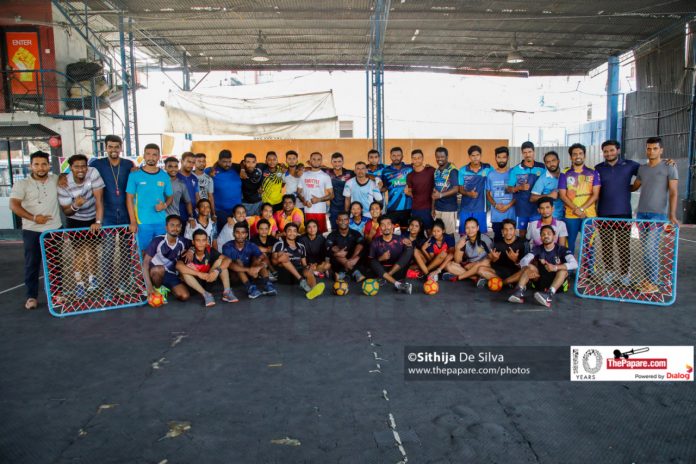 Tchoukball in Sri Lanka, is a rapidly growing sport that is looking to spread the message of peace-building through sport.

Tchoukball, a sport alien to many, is the fastest handball sport in the world. With a short history of not even half a century, Tchoukball is currently played in 70 countries across the world.  It is a sport that involves many core skills from many different sports. The passing strategy and the ball is similar to that which is used in Handball, the rebounding effect of the frame draws many a similarity with Squash while the ball dashing strategy and defence look a lot like what we see in Volleyball. 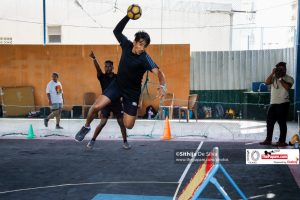 Tchoukball Sri Lanka took another leap forward in spreading the sport, concluding a full day training program on the 27th of July 2019 (yesterday) at Colombo Futsal Club, Dehiwala. The training program was conducted by the Sri Lanka Tchoukball Association. With a participation of over 50 newbies to the sport from across the country, the training session comprised of teaching basic practical skills and player motivation and concluded with a series of matches played between a mixture of newcomers and experienced players. Guest speakers such as former national swimmer and coach Julian Bolling, Amantha Wijesuriya, Sachintha Dulanjaya and Ramzi Deen were present at the training program to enrich the players with the knowledge of sportsmanship, confidence and peace building through sport.

Tchoukball is played with 7 players on the court and 5 subsidiary players on the bench, adding a total of 12 players in a team. A standard game will go on for three periods of 15 minutes each with a 5-minute break in between periods. The game is usually an indoor sport played on a basketball court enclosed within a 27m x 17m area, however the newer from of the sport, beach tchoukball uses a court of the size of 21m x 12m. The speciality of the court in this game is the “forbidden zone”, technically a semi-circular area drawn to the radius of 3m around the scoring frame, which as its name suggests is a forbidden area.

The Tchoukball Charter documents all rules and regulations of the sport with special attention given to the game’s simplicity and discipline, harping on respect within one’s self, within the team and during play.  The basic disposition of the game rallies on the motto ‘A Sport For All’ moving away from stiff competition and composed as a tool of peace building.

The evolution of Tchoukball dates back a few decades to the 1970s when Dr. Herman Bandt, a Swiss biologist brought the topic of the adversities of team sports through his research on ‘A Scientific Criticism of Team Games’. Understanding the importance of physical activity, he created awareness on severe injuries that are caused by many contact sports in the world today. After critically analysing the existing major games of the world, Dr. Brandt succeeded in constructing a new sport in Tchoukball, one which would hopefully minimize the risks faced when playing other sports. 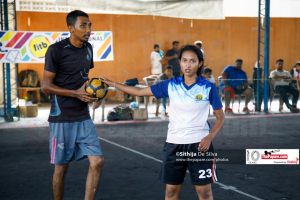 The name Tchoukball, though hard to pronounce and rather strange, is simply derived from the sound ‘Tchouk’ made by the ball rebounding on the frame. England and Switzerland are the two nations which can be called the founding countries of the sport. Currently the republic of China has established itself as the forerunner in the sport, in both Men’s and Women’s categories, having been crowned champions at the World Tchoukball Championships 2015 hosted in China.

The game revolves around the number 3: 3 seconds, 3 steps and 3 passes. The ball used for the game can only be held by a player for three seconds. Each team can pass the ball only between three players of the same team before attempting to score. The players are also penalized for moving with the ball for more than 3 steps. Unlike the mainstream team sports, the point system in Tchoukball also celebrates simplicity, awarding one point at a time. Both teams can score on either end of the court.

The team with the ball gets a point if:

The other team gets a point if :

A player commits a penalty if:

In front of each rebound surface is a semi-circle with a three-meter (9.9 ft) radius, which is called.

the ball. Either case, the player’s feet may not be in the forbidden zone if the ball is still in his hands.

The game of Tchoukball revolves around the significant qualities of team play, concentration, respect and empathy. Understanding the personal development of an individual through the conduct of sports, Tchoukball was introduced to Sri Lanka to spread the common message of the game.

“Tchoukball is not to make champions, but rather to help construct a harmonious society and we have seen how Tchoukball helps people to come together as one community.” –President of the South Asia Tchoukball Federation and Founder of Tchoukball in Sri Lanka Jonathan Wijesinghe said.

With the noble objective of peace building within the contours of Sri Lanka, Tchoukball is not only a powerful “tool” but also a clear reflection of strength in diversity.  Tchoukball in Sri Lanka connects the cross-sectional vibrancy of the Island, bringing together individuals from the Northern, Southern, Eastern, Western and Central Provinces entrusted with the formula of ONE BALL – ONE COMMUNITY – ONE SRI LANKA.

Currently Sri Lanka boast a tally of 1800 trained players. Tchoukball in Sri Lanka assembles the youth from schools, universities and the working community, irrespective of their sporting backgrounds and experience. Entering the international grounds of Tchoukball last year, Sri Lanka managed to claim seventh place in the Asian arena. With 24 coaches with an ‘International Coach License’ and 15 individuals experienced in the game in the International Arena, Sri Lanka have a chance to take this ‘new sport’ all the way and make a name for themselves in the international arena.