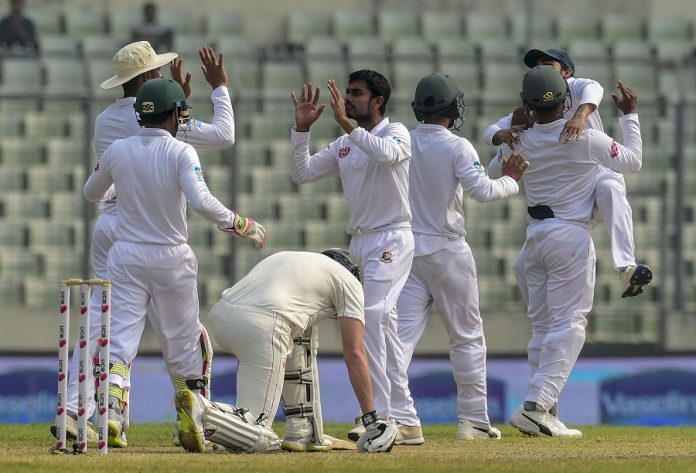 Bangladesh completed a comprehensive 218-run victory over Zimbabwe at Sher-e Bangla National Stadium in Dhaka to square the two-Test series 1-1.

Mehidy Hasan was the star for Bangladesh, returning 5/38 on the fifth-day pitch to cripple Zimbabwe in their pursuit of the 443-run target.

Brendan Taylor, who remained unbeaten on 106, became the first from Zimbabwe to score two centuries in a Test match twice. However, he received little support from the other end, as the visitors crumbled for 224 in the final innings.

Zimbabwe started the day at 76/2, with Taylor and Sean Williams at the crease. Bangladesh bowled with intent and desire upfront, clinching two wickets in the morning session. Williams was the first to fall as he was squared up and bowled by Mustafizur Rahman within the first hour of play.

Sikandar Raza, who scored a duck in Zimbabwe’s first innings, could last just 33 deliveries before falling to Taijul Islam caught-and-bowled after adding 21 runs with Taylor for the fourth wicket.

Zimbabwe stun Bangladesh to go 1-0 up

Taylor continued to apply himself well, notching up his half-century in the first session – Zimbabwe went to lunch at 161/4 with Taylor and Peter Moor in the middle.

Moor fell soon after lunch, though, for 13, as he became Mehidy’s first wicket of the day when an inside edge flew to Imrul Kayes at short-leg.

Regis Chakabva, who came in next, was run out by Mushfiqur Rahim for two, and things were all downhill after that. Donald Tiripano, Brandon Mavuta and Kyle Jarvis were dismissed by Mehidy for scores of 0, 0 and 1 respectively, and with Tendai Chatara out of the game with a muscle strain, that’s where it ended.

Mehidy, who picked up his fifth five-wicket haul in Tests, was supported well by Taijul, who claimed two scalps in the innings. The duo was exceptional in Zimbabwe’s first innings as well, picking up eight wickets between them to give Bangladesh a 218-run lead.

Mushfiqur Rahim, who scored 219* in the Bangladesh first innings, was named Player of the Match, while Taijul, with 18 wickets in the two games, was Player of the Series.