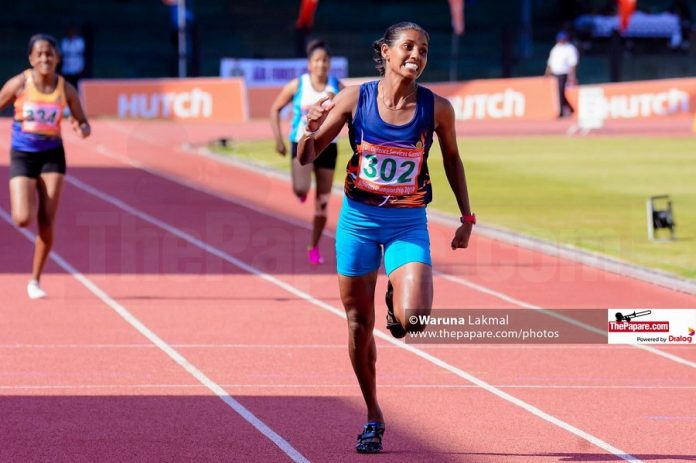 The second day of the 10th Defense Services Athletic Championship concluded today at the Sugathdasa Stadium, with a New National record and three new meet records being established.

Sri Lanka’s very own Iron women Lakshika Sugandi , of Sri Lanka Army who has been making waves in the heptathlon, stole the limelight by bettering the national record she established just a couple of months ago at the 96th National championship. Sugandi accumulated a total of 4911 points and surpassed her previous record of 4906 by 5 points. It’s a remarkable feat by the athlete who arguably is the most versatile track and field athlete in the country; she is the national champion of the Women’s 100m hurdles apart from being the national record holder in the grueling heptathlon where she has to compete in 8 events in the span of two days.

Lakshika Sugandi, sharing her thoughts after the record breaking performance at the 96th Athletic Championship. 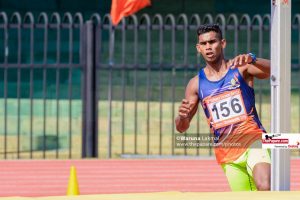 Similar to Sugandi, Ajith Karunathilaka who is making giant strides in the Decathlon, having become the first Sri Lankan to surpass the 7000point mark in the decathlon established a new meet record today collecting 6961 points at the end of the ten events of the decathlon. Karunathilaka was impressive at the concluded National athletic championship where he managed to renew his own national record with an outstanding total of 7356 points, and must be given better competition opportunity overseas to be able to further elevate his performances.

Sri Lanka’s premier men’s 800m runner Indunil  Herath who had a tour to forget at the Asian Games, where he could not reach his potential bounced back today at the Defense Services Athletic Championship managing to finish the 800m final with a new meet record time of 1.48.00. Indunil bettered the previous record time of 1.49.78 which stood for 8 years having been established in 2010. 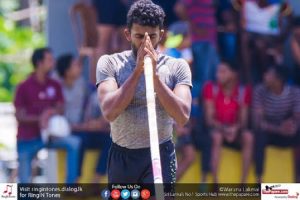 National record holder in the men’s pole vault, Ishara Sandaruwan of Sri Lanka Airforce made a welcome return to form as he managed to win the top spot of the men’s pole vault with a new meet record leap of 5.00m. Ishara, who holds the national record for his personal best of 5.11 at the National trials last year, has not had a good run this year having had to bow out from the past couple of competitions due to unsuccessful jumps. He will be very much relived of his performance all though he is well short of his personal best. C. P. Senarath of Sri Lanka Army was placed second clearing 4.40m, while H. S. Janith also from Sri Lanka Army was placed third clearing the same height.

With the National champion in the Women’s discus throw, Ayesha Maduwanthi not competing at the Defense Services Championship as she has taken wing to Korea to compete in the MokPo International throwing championship, Madurangi Perera of Sri Lanka Navy made the maximum use of the opportunity to clinch the top spot in the Women’s discuss final with a new meet record throw of 44.36m. W.M. Weerasekara and V.V. Lakmali of Sri Lanka Airforce were placed second and third respectively.

It was redemption for Nimali Liyanarachchi of the Sri Lanka Air force, as she managed to get the better of her rival Gayanthika Abeyrathne in the Women’s 800m. Nimali missed out on a spot in the Asian Games final as Gayanthika beat Nimali to the final qualifying spot in the final.  Nimali however managed to get the better of her today in the 800m final clocking 2:06.12, while Gayanthika was a close second clocking 2:06.40. M. C. Dilrukshi of the Sri Lanka army was placed third clocking 2:08.00. The rivalry between Gayanthika and Nimali has payed rich returns for Sri Lanka and will again set up an interesting final at the National Sports festival which will be held next month.

Nilani Ratnayake of Sri Lanka Army bounced backed from her defeat to Gayanthika Abeyrathne yesterday in the 1500m to take a comfortable victory in her pet event, the Women’s 3000m steeple chase. Despite not nearing her best time Nilani was ahead of the rest finishing the race clocking 10:20.71. W. P. Dulakshi of the Sri Lanka Air force was placed second with a time of 10:47.62. W. N. Kumari of the Sri Lanka Navy secured the third-place finishing with a time of 11:11.26

The second day got on to an explosive start with the both men’s & women’s 4X100m relays being conducted. Both men’s and women’s teams of Sri Lanka Army who are blessed with a host of National athletes in their ranks were the pre-race favorites and lived up to the expectations sweeping away the top spot in both men’s & women’s relays. In the women’s relay Sri Lanka Army relay team consisting of Rumeshika Ratnayake, Lakshika Sugandi, S. P. Jayathilaka and M. G. Ferdinandas clocked 46.57secs to win the top spot while Sri Lanka Airforce was placed second clocking 47.45secs, and Sri Lanka Navy was placed third clocking 49.89secs.  In the Men’s relay Sri Lanka Army team which consisted of Himasha Eshan, H. S. Kumara, Shehan Ambeypitiya and Sumesh Wickramainghe made easy work clocking 41.33secs; while Sri Lanka Navy was placed second clocking 42.73. Sri Lanka Airforce team was disqualified from the competition.

Tomorrow will be the third and the final day of the Defense Services Athletic Championship. Visit Sri Lanka’s #1 sports hub ThePapare.com’s www.thepapare.com/athletics page to receive on time updates about the competition.