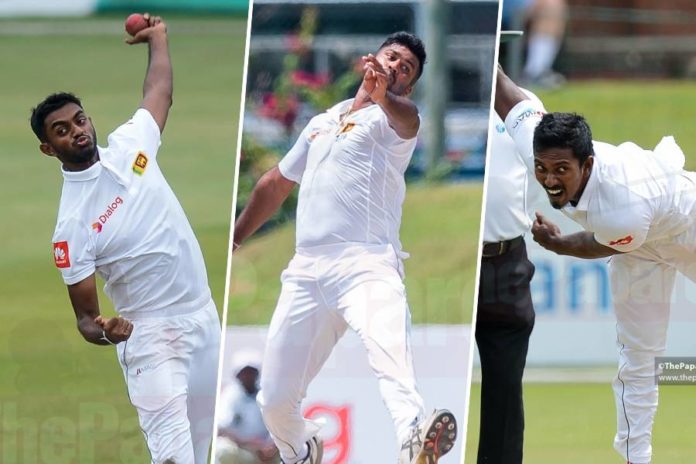 Sri Lanka’s selectors have named a host of fast bowlers in the preliminary pool chosen for the bilateral series against Bangladesh and the consensus is that most of them will be retained in the pruned squad of 15.

Read – An average better than Sanga’s

The argument that the best method to beat Bangladesh is with pace, is quite sound, with spin playing a pivotal part when Bangladesh won the Oval Test match here in 2017, their only win against Sri Lanka. There is more reason not to rely on spin as Rangana Herath is gone and Dilruwan Perera is on his last legs.

Authorities, however, need to be watchful not to rely overly on pace. Whether you like it or not, pace has never been Sri Lanka’s forte and they have won games thanks to the brilliance of their spinners time and again. The Bangladesh series, however, is an isolated case and there’s no harm in opting for a horses for courses strategy particularly with the team not doing so well in recent times.

Over the years, our over reliance on pace has backfired. The Pallekele Test match against Pakistan in 2015 is a case in point. The teams headed to Pallekele with the series levelled 1-1. In their wisdom, Sri Lanka’s then selectors opted for a full-strength pace attack, leaving out Rangana Herath of all people. Despite having Angelo Mathews as a backup seamer, they opted for three frontline seam bowlers in Nuwan Pradeep, Dhammika Prasad and Suranga Lakmal. It was a decision that the team was made to regret.

Pakistan were set a daunting target of 377. The bowling was one dimensional, lacked variation and eventually the tourists chased down the target with seven wickets to spare with Younis Khan leading the onslaught with a majestic 171 not out.

Until then, Angelo Mathews had looked an inspirational leader. But on that final day, with the bowling lacking penetration and unable to create chances, Mathews lost his aura. He badly needed Herath’s presence. Mathews has regretted the costly mistake. But what he has not said is that whether he had any bargaining power at all at selection meetings at that point.

With two Tests against Bangladesh set to be played at Pallekele, authorities should not forget the mistakes of the past.

The main problem that we face is that most of our pace bowlers clock the same speed. Lahiru Kumara and Dushmantha Chameera can of course generate pace but while the former is all over the place, the latter has been plagued by injury. Kumara has time on his side to still make it and he can seriously trouble the batters with raw pace although at times he appears to lack imagination.

Vishwa Fernando is someone who solves the variety problem and with his left arm swing bowling did a splendid job during the series win in South Africa. He is certainly a skillful bowler who has much to offer but his opportunities have been few as eight Tests in four years suggest. Worryingly, he seems to be not the preferred option when matches are played at home. Six of his eight Tests have been away from home.

There’s excitement among the selectors that Santhush Gunathilake has got it in him to make it big at the highest level. A fast bowling all-rounder is such a massive strength to a side especially when you play overseas. There have been many exciting talents over the years but none have gone onto become a Jacques Kallis or Ian Botham.

Santhush, who will turn 21 next week has played just a handful of First-Class games and it was a big call to draft him into the national pool. Looking from a distance, he looks a proper batsman and his appearances may deceive his capabilities as a bowler.

Not that Santhush will come close to playing against Bangladesh. Ashantha De Mel has been a firm believer in drafting in young players into the squad just to give them a flavor of international cricket. He believes that this enables a player to mature quickly just being around established international stars. He has done so during his previous stints as well.

De Mel’s tenure has come to an end and he has been told to continue until a new panel is appointed. There is possibility that he could be retained in order to have continuity.

One year terms for selectors are a futile exercise as it does not allow them to execute their plans. With the Sports Law expected to be reviewed and amended that is certainly one area that needs to be looked at. Trevor Hohns for example has had longer stints as Chairman of Selectors than anyone else and has made some tough decisions. Ending the career of Ian Healey and bringing in Adam Gilchrist is a case in point while stripping Steve Waugh of ODI captaincy and handing the reins to Ricky Ponting is another.