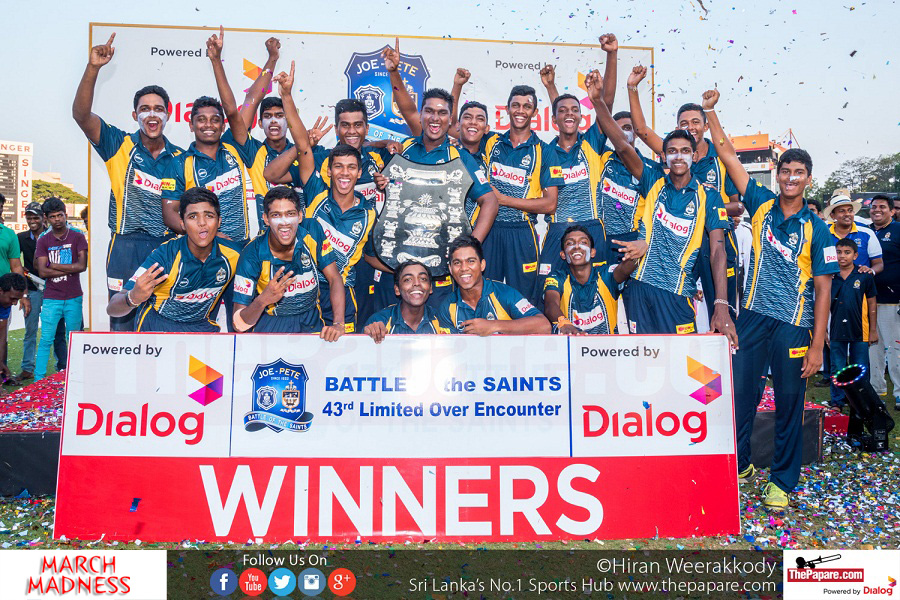 St.Peter’s College completed a scintillating hat-trick of Big match victories over arch rivals St.Joseph’s College by 54 runs in the 43rd Battle of the Saints worked off at the SSC grounds.

Winning the toss the St.Peter’s skipper Lakshina Rodrigo had no hesitation in taking the first lease of a flat SSC track. The openers Anishka Perera and Santhush Gunathilake couldn’t put on a substantial opening stand as Anishka was the first casualty of the day of the bowling of Jehan Daniel.

Sathush stroked some elegant boundaries there on in as he steadied the ship for the Peterites. However, he was caught in his crease of the bowling of Ruchira Ekanayake as the St.Peter’s found selves at 50/2.

Shalith Fernando shortly after as the Peterites were in a spot of bother losing their third wicket with the score on a mere 76.

The record breaking partnership came to terms with the fall of the third as, Sulakshana Fernando and Manelka DeSilva were paired in the middle. They put on a momentos 176 run partnership to light up the SSC with some breathtaking stroke play. Despite Sulakshana falling short of a well deserved century, Sri Lanka u19 cap Manelkar De Silva went to write his name in the history books scoring a commanding century.

Despite losing wickets during crucial intervals the Peterites managed to go over the 300 run barrier as they eventually folded for 311/7 at the end of their quota of 50 overs.

In pursuit of a record chase the Josephians got off to the worse possible start losing both openers for a mere 8 runs on board. Dineth Madurawala and Havith Perera ignited the fightback as they put on a fighting 114 run partnership for the 3rd wicket.

Lakshina Rodrigo came up with some inspired bowling changes as both Manelkar DeSilva and Santhush Gunathilaka bagged Havith Perera and Dineth Madurawela respectively. Star batsman Jehan Daniel showed signs which put a sensational comeback on the cards,however with his dismissal it was a matter of delaying the inevitable by the Josephian lower order.

The game came to rather timid end with both Pahan Perera and Jehan Fernandopulle showed very little intent in attempting to chase the Peterite target. The Josephian struggle eventually came to a close of their last wicket fell in the penultimate delivery handing a resounding victory for the Peterites.