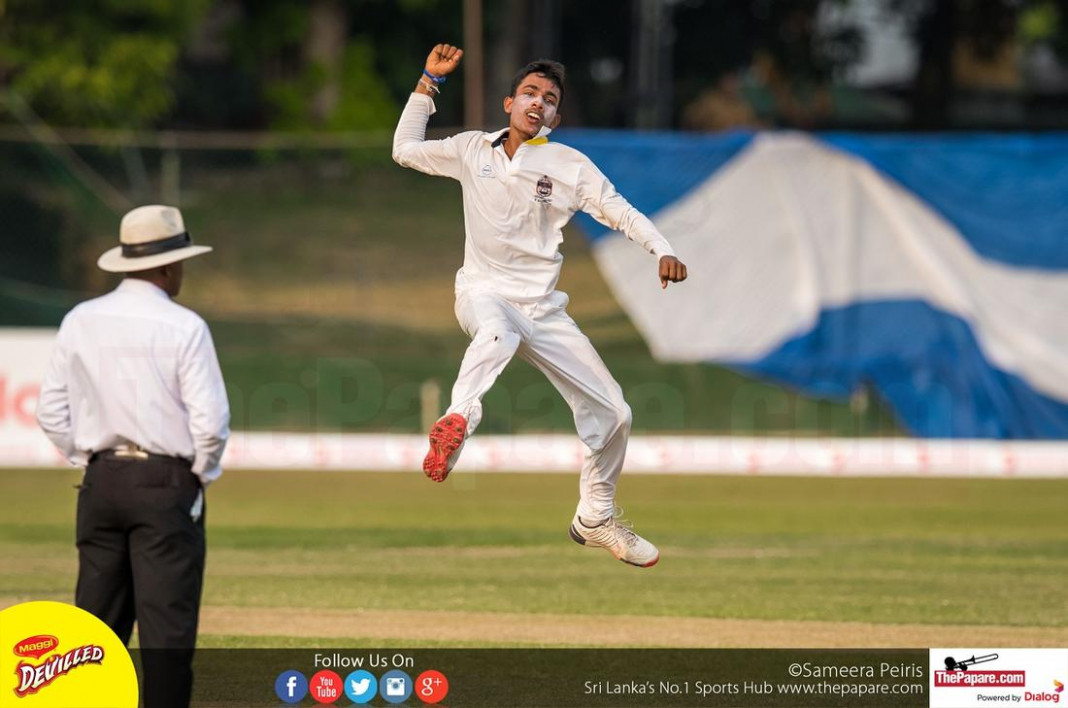 St. Peter’s College dominated proceedings in their 82nd Battle of the Saints against St. Joseph’s College on day one at P. Sara Stadium on Friday.

Off-spinner Taneesha Weerakoon picked up 6 for 33 as St. Joseph’s College was bowled out for 106 in their first innings after their arch-rivals St. Peter’s College posted a mammoth 304 for 9 in their allotted 60 overs.

Josephian skipper Sandaruwan Rodrigo won the toss and elected to field first on a pitch which had a grass cover but was ideal for batting. The Peterite openers, Inesh Fernando and Anishka Perera got their alma mater to a cracking start adding 36 in 3.3 overs before Perera chopped on onto the stumps. Fernando was then sent back to the pavilion by Sandaruwan Rodrigo as Revan Kelly took a nice low catch.

The Peterite run-machine, Lakshina Rodrigo was struck right-in front of the stumps by Harin Cooray as he was dismissed for 18. Hashan Wanasekara reached a well-deserved 67-ball 59 before he was neatly caught by Malshan Rodrigo off Jehan Daniel.

After being 131 for 4, Ranmith Jayasena and Manelker De Silva pelted the Josephian bowling all around the park as they added 108 runs for the 5th wicket. De Silva was given LBW for 71 off Charuka Raveen to end a dangerous partnership. The late order batsmen contributed cheaply to carry St. Peter’s College to a commanding 304 as they made 55 in their last 10 overs. Fast-bowler Jehan Daniel was the most impressive bowler for the Josephians picking up 3 for 79 while Ruchira Ekanayake and Charuka Raveen took 2 wickets apiece.

St. Joseph’s in their reply, lost both their openers, Revan Kelly and Sandaruwan Rodrigo for 13 and 8 respectively as opening bowler Ravindu Silva used the short-ball perfectly to inflict early damage to the Josephians.

Star player Jehan Daniel was brilliantly caught by Anishka Perera off Manelker De Silva as the Josephians were in dire-straits at 39 for 3.

Left-handers Nipun Sumanasinghe and Pahan Perera consolidated the Josephian innings with a 35-run stand for the 4th wicket before Perera was controversially given LBW off Weerakoon as it started a major batting collapse for the Josephians.

Off-spinner Taneesha completely ran through the Josephian batting line up as they could not cope up with the accurate bowling by the Peterites. Sumanasinghe was the top-scorer with 25. After being 74 for 3, St. Joseph’s were disastrously all-out for 106.

The Peterites enforced the follow-on but the Josephian’s batted positively to stay on course to save the game on Saturday.