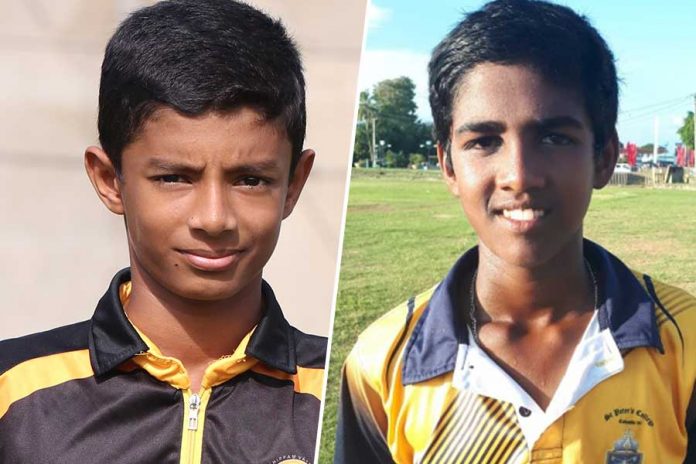 Skipper of Mahinda College, Galle Tharusha Dilshan’s top all-round performances made it easy for his team to qualify for the next round of the Singer Schools U13 Division I Cricket Tournament. He took 5 wickets for 23 runs and scored 24 valuable runs for his team.

Last year’s runner up Mahinda College, Galle advanced to the quarter final round of the Singer Schools U13 Division I Cricket Tournament played yesterday 06th January 2019 at Moratuwa.

After winning the toss the visiting team decided to bat first and put up a decent score of 176 runs for the loss of 07 wickets at the end of 59.2 overs and declared their 1st inning. Binura Kulapahana, Nikhil Sithumina and Thimoth Tharindu scored 30’s to their team by adding 38, 37, and 31 runs respectively, while Kavin Rukshan and Tharindu Dilshan scored 24 runs each. For the home team juniors Nadeesh Fernando, Vimath Bimsara and Binanda Serasinghe took 2 wickets each with figures of 2 for 13, 2 for 31 and 2 for 34 individually.

Chasing down the target for their first inning the juniors from Moratuwa managed to score only 67 runs for the loss of 07 wickets by the end of 34 overs before the match officials called it for the day. Tharindu Dilshan demolished the home team batting lineup by grabbing 5 wickets for 23 runs.

Match ended in a draw while Mahinda College, Galle won by points and qualified for the Quarter Finals.

Another Singer Schools U13 Division I Cricket  Tournament Pre Quarter Final was match played yesterday at Wennappuwa when the home team Joseph Vaz took on the juniors from Bamba.

Batting first the home team juniors could score only 94 runs all out by the end of 60.2 overs. Ishira Ayupala erased the home team line up by picking up 5 wickets giving away just 13 runs and Lashmika Perera took 3 wickets for 8 runs while Vishen Helambage chipped in with two more wickets for 23 runs.

Hunting the target of 95 runs the visiting juniors managed to score 86 runs for the loss of 5 wickets by the end of 32 overs when the umpires called it for the day.

The match ended up draw while St. Peter’s College, Bambalapitiya won by points and qualified for the Quarters.