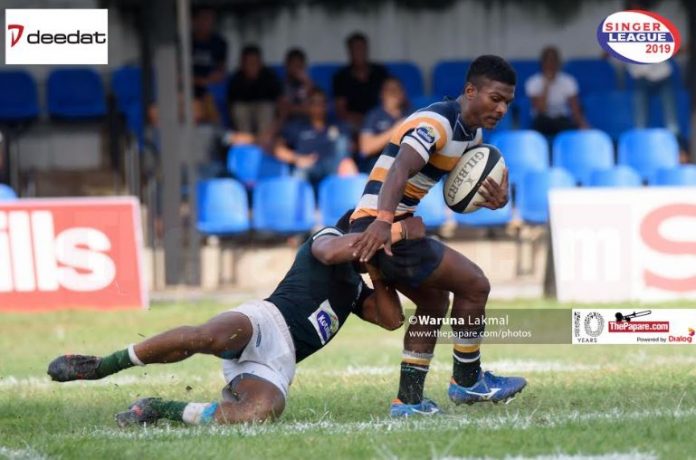 A whopping 22 points from the Peterite fly half Thenuka Nanayakkara secured the third consecutive win against Isipathana College in their penultimate match of the league at Bamabalapitiya today.

Isipathana-St Peter’s encounters have always produced some breathtaking rugby and today was nothing short of what was expected. The visitors coming off from a disappointing defeat against the double blues while the hosts secure 5-peat against the Trinity lions last week. However, the Peterites was not anywhere close to what they were last week and it was Pathana who looked superior in the first few phases.

Thenuka Nanayakkara opened the scoring for the home side with a fairly straightforward penalty from 40m out. Isipathana bounced back immediately with a converted try by Manula Rathnayaka. The forwards carried the ball from the 5m line out and finally drew the ball out wide for the winger to sneak through from the corner. Manilka Ruberu added the extras. (SPC 3 – IC 7)

Shortly afterwards Nanayakkara’s boot earned his team another three pointer to cut down the deficit to just 1 point. But, they failed to keep possession which paved way for Isipathana to extend their lead with another converted try. Ruberu at first receiver got the ball from the line out, he smartly went for the long pass which created the overlap on the corner and Winger Praveen Stefan only had to run straight and touchdown. The conversion was successful by Ruberu. (SPC 6 – IC 14)

Peterites were sloppy in the first 15 minutes. They conceded many scrums and their line outs were all over the place. They finally found their footing when Isipathana was down to 14 after Venura Kodagoda received a Yellow card. They found the whitewash for the first time in the 25th minute. They worked their line from the 22m and the Isipathana defense was caught napping. The nippy winger Ishan Fernando sprinted from the corner to touchdown.  Nanayakkara added the extras with ease. (SPC 13 – IC 14)

The hosts took the attack to the visitors and they got back the lead with a brilliant try from Nanayakkara. Raveen Fernando who identified the space out wide and sent the ball to Nanayakkara who shoved off the final defender and jumped over. He converted his own try to extend the deficit to 6 points. (SPC 20 – IC 14)

The home side failed to keep the lead as they conceded a try in the 33rd minute. It was through a smart line out taken by Isipathana College. They opted to go for a 13 man line out. There was no way the Peterites could hold on to that and it was Manilka Ruberu who carried the ball over. His conversion was successful which got them a one point lead going into lemons.

The second half was a drag, both teams had their moments but failed to convert them into points. Ruberu missed out on a fairly  straightforward penalty in the 48th minute and even though they found themselves in the attacking half most times, they couldn’t earn any points. However after the the 50th minute, Isipathana looked rusty. They conceded two back to back yellow cards with both Praveen Steffan and Manoj Gautham.

ThePapare Most Popular Schools Rugby Player is back!

The two man advantage took away Isipathana’s chances of making any inroads. They were stuck in their own half and finally, Peterites found the opening they were looking for. Ruck was formed on the 5m, Raveen Fernando used his forwards through for a few phases and then, sent the ball wide to Nanayakkara who just pushed his way through the middle. He made sure to add the two points which gave his team a 6 point lead going into the last ten minutes. (SPC 27 – IC 21)

The last ten minutes were tense but both teams failed keep the continuity and finally the time ran out from the visitors as St Peter’s College secured another win and another week on the top of the table.