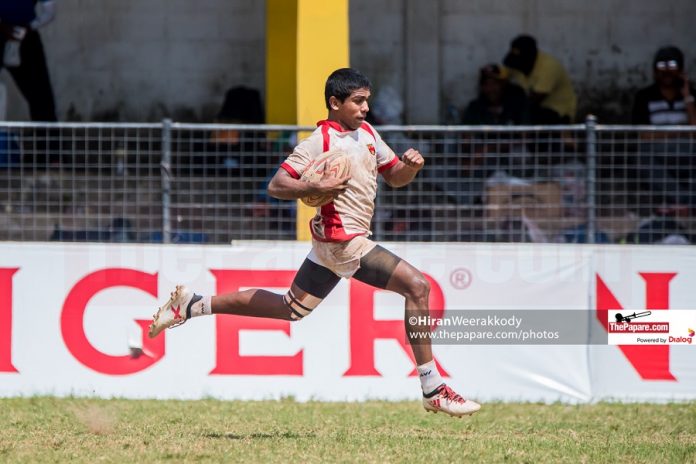 St. Joseph’s College were shocked by Science College Mount Lavinia, as the boys from beside the sea came up trumps 12-5, shocking the lads from Maradana, grabbing a cup quarterfinal birth in the under 18 sevens played at the Royal College Sports Complex.

Meanwhile, Royal College is set to face arch rivals Trinity College, Vidyartha go up against Wesley College, St. Peter’s against Isipathana College and Science Colleges’ reward for the win sees them face off against St. Anthony’s College in the four cup quarter finals to be played on day two.

Eight groups saw 25 teams take centre stage at the Complex as three teams were placed in six groups, with one group having two teams and another with four.

Link : U18 sevens to crown a new champion?

Royal began the play-off against Maliyadewa in stunning fashion, however, the lads from Kurunegala struck back but it was too little too late as Royal hung on to win 48-12, taking first spot in group B.

Zahira College narrowly defeated Sri Sumangala by a single try, while Vidyartha College easily dispatched their Kandy rivals as Zahire took on Vidyartha for a top spot in group C.

Zahira College began in fighting fashion scoring twice, however, it was the lads from Vidyartha who bounced back, grabbing the game by the scruff of its neck, to end it 26-12, securing top spot and a cup quarter final on day two.

Four try St. Peter’s came about for their only fixture — in the only group with two sides –, defeating fellow rival DS Senanayake College in group E, as the Peterites booked a cup quarter final berth while DS were relegated to the bowl segment.

Isipathana College were too good for both CWW Kannangara and Lumbini as the Green Machine dismantled both opponents in group F, conceding only one try in both outings.

St. Anthony’s College were the dominant force in group G — the single group with 4 teams — as the boys from the Hill Capital dismantled opponent after opponent, conceding just a single converted try, topping the group and taking their place in the cup quarter final. Ananda College finished behind them with two wins over St. Aloysius College and Royal College Panadura, taking a place in the bowl quarter finals.

Science College started off on the front foot, scoring the only first half try as the game was on a knife edge going into the second half. The Science defence held firm throughout the second half as the Josephians came close to getting off the mark, however, were kept at bay.

The boys from Mount Lavinia built on their defensive strength, going on to score their second as time and the game ran away from St. Joseph’s College as the shock of the day was complete as Science booked their cup quarter final birth, leaving the Josephians to be satisfied with a bowl quarter final place to play for on day two.

With these results, the four cup quarter finals will take place early on day two while the bowl quarter finals will follow as Kingswood go up against Maliyadewa, while, Vidyartha, DS Senanayake and Ananda take on Mahanama, Lumbini and St. Joseph’s College respectively.

The second day will be telecast live on ThePapare.com from 9am onwards as the action heats up in the under 18 Sevens at the Royal Complex.

The three lions crowned kings of the Hills