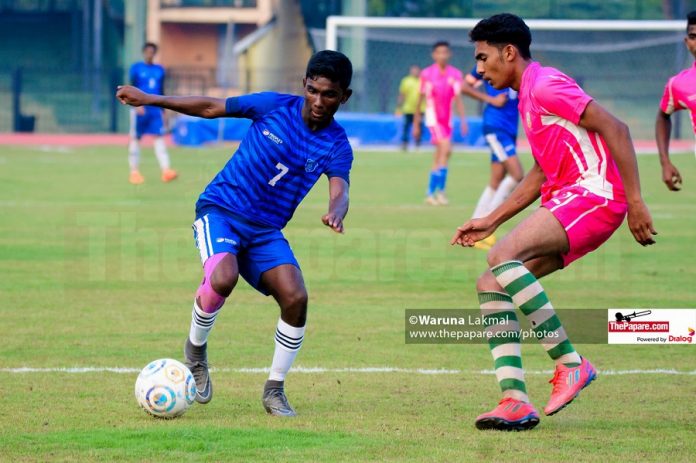 St Joseph’s cruised past a luckless Kinniya Central College 4 goals to nil at the Sugathadasa Stadium in the second semi final of the All Island Under 18 Football Championship. Shenal Sandesh helping himself to a brace and Pathum Gimhan and N.Lakshithan scoring one each.

In a hard-fought encounter, Royal College came out with all three points, 2-1 against De Mazenod College in the U18…

Kinniya Central kicked off the second semi final however it were the Josephians who were on the front foot from the onset. Shenal Sandesh getting a opportunity early as the 4th minute as he was found by a Kavindya Rupasinghe pass. He was just unable to guide past the on rushing Kinniya Central goal keeper Mohamed Mursith.

Shenal Sandesh then pounced on a deflection off a Sachinthaka Perera shot outside the penalty box in the 8th minute.

Kinniya Central almost got a goal Immediately as keeper Sasindu Jayasinghe fumbled an easy lob towards goal. Rifkhan Ahamed was not able to get to it to get the vital touch.

15 minutes gone Joes had the opportunity to increase the lead as Shenal Sandesh sent in a cut back initially falling to Kishor Ronny Joy and then to Kavindya Rupasinghe where both failed to take a clear shot at goal.

Kinniya Central grew into the game gradually and were threatening with attacking moves of their own as the Josephians weren’t given much time on the ball. Rifkhan Ahamed was a constant threat down the left flank.

In the 31st minute the Josephian keeper Sasindu Jayasinghe got away with a minimum of a yellow card when he chased down a ball to the by-line and then collected the ball out of the box. Referee for everyone’s surprise only gave away a free kick.

The game became a scrappy but intense affair just before the break as Kinniya Central pushed for a equalizer thus creating space for the Josephians at the back.

Mohamed Ilham then rattled the cross bar 5 minutes to the break with a long range effort with Sasindu beaten all ends up.

Just a minute in to the second half Rifkhan Ahamed was at an end of a cross from the right which he managed to control. However indecision let him down as the Joes cleared the line.

Rifkhan Ahamed almost equalized for Kinniya Central when his header was goal bound from a cross from Mohamed Musaraf only to be blocked by the big frame of Sasindu Jayasinghe. Immediately after Joes increased their lead through Pathum Gimhan sliding to a cross from Jonathan Thomas hitting the roof of the net.

Kinniya Central kept on trying to find a goal however their end product deprived them as Shenal Sandesh increased the lead with a break away goal in the 69th minute to literally end the game for Kinniya Central.

Kinniya Central hit the cross bar once again when Mohamed Firnas effort was on target and keeper Sasindu got finger tips to keep the Central boys frustrated. As he did the entire evening.

N. Lakshithan then completed the route with another sliding effort from a Shenal Sandesh cross in the closing minutes of the game.